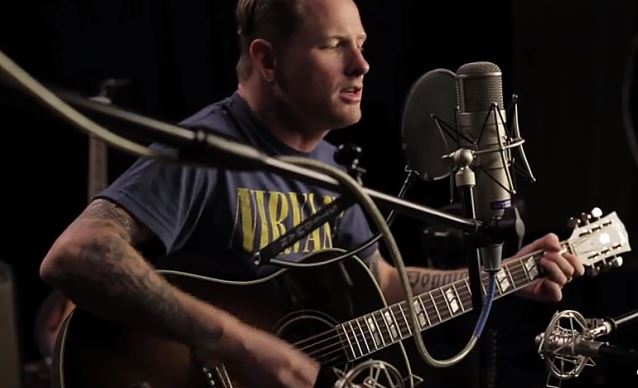 SLIPKNOT and STONE SOUR frontman Corey Taylor performed an acoustic cover version of THE CLASH's "London Calling" for Google Play's "Uncovered Sessions". You can watch video footage of his performance below.

Taylor's recently published book, "A Funny Thing Happened On The Way To Heaven (Or, How I Made Peace With The Paranormal And Stigmatized Zealots And Cynics In The Process)", chronicles Taylor's experiences with the paranormal and his quest to find an explanation for such incidents. Taylor told The Pulse Of Radio that he decided to seek out answers after too many strange things happened to him and around him. "It's amazing what people will come up with to rationalize something that can't be rationalized," he said. "Look, if something has a definite, real explanation, I'm the first to go, 'Oh, OK, that makes sense.' But some things cannot be explained, like a thermos being thrown behind me when I'm the only one awake in the house at seven in the morning. The list goes on and on for me, you know, so it's like, it's time for me to start kind of figuring things out for myself."

Taylor said he sought out insight from so-called "ghost hunters," skeptics and religious leaders while working on the book.

While STONE SOUR plans to take the rest of the year off, Taylor will perform with SLIPKNOT on October 19 in Brazil. The band will then begin putting music together for its long-awaited fifth album in early 2014.

"House Of Gold & Bones - Part 2", the second part of STONE SOUR's two-album series, "House of Gold & Bones", sold 35,000 copies in the United States in its first week of release to land at position No. 10 on The Billboard 200 chart. The record arrived in stores on April 9 via Roadrunner.