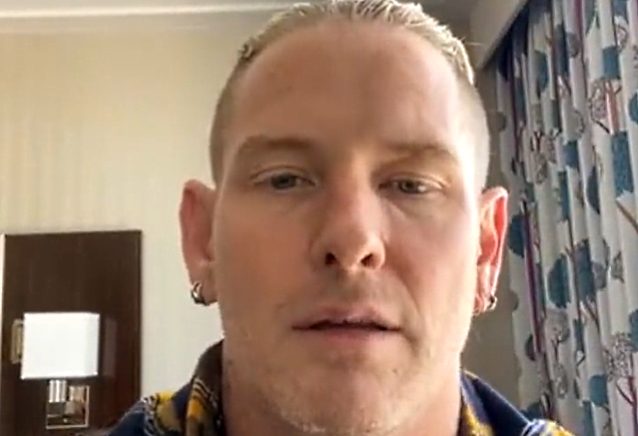 SLIPKNOT will play the biggest headlining concert of its career to date on Friday, November 5 at the Knotfest Los Angeles at the Banc of California Stadium.

The Southern California edition of the traveling festival will feature additional performances by BRING ME THE HORIZON, KILLSWITCH ENGAGE, FEVER 333, CODE ORANGE, VENDED and CHERRY BOMBS.

Earlier today (Thursday, October 28),SLIPKNOT singer Corey Taylor and BRING ME THE HORIZON frontman Oli Sykes discussed the upcoming event during a live chat with Knotfest.com's Ryan J. Downey. Asked what SLIPKNOT fans can expect from the show, Taylor said (as transcribed by BLABBERMOUTH.NET): "The cool thing is that we really worked on a pretty fucking killer set to put together, which we kind of pieced together over some rehearsals — just kind of trial and error, putting the show together and really got it locked tight. But, having said that, we've got some cool surprises ready for Knotfest L.A. Just for the fact that our career's kind of been leading towards this now. And the fact that we have such a stacked lineup — not just BRING ME, but, obviously, KILLSWITCH, FEVER 333, CODE ORANGE, my son's band VENDED, my wife's dance [group] is gonna be doing an incredible show right before BRING ME plays.

"We're all really, really stoked that we're gonna be able to do something really special for L.A., and, honestly, our first real stadium show," he continued. "So that's what I'm most stoked about — not just our show, but just the fact that we're putting something on as a testimony to the music we love, the fans that we love to play for, and just hopefully the start of something massive in the future."

For all the fans around the globe unable to be present at Knotfest Los Angeles, the show will be streamed live. SLIPKNOT's first-ever livestream, the event will allow fans to share all the excitement of a SLIPKNOT gig, both live as it happens, and for a full 72 hours after. Tickets are on sale now at knotfest.veeps.com, priced at a discounted pre-sale cost of $15, with on-the-day tickets being $20. Knotfest members are eligible to purchase at a discounted price of $12. Tickets bundled with event merch are also available.

Ticket holders can still watch the stream up to 72 hours post event, so don't worry if you can't watch "live" on the night.

In late August, the Grammy Award-winning Iowan icons took Knotfest back to their home state for Knotfest Iowa, selling out an expanded capacity show at the National Balloon Classic Field in Indianola. The band is currently on the "Knotfest Roadshow" tour, which is snaking its way across the USA, culminating at the Banc Of California Stadium show for this very special event.