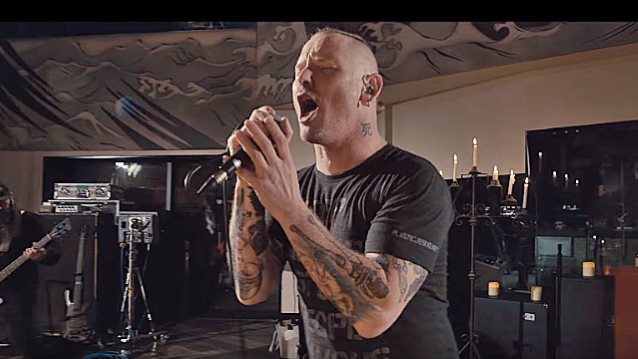 Meltdown of the WRIF radio station recently conducted an interview with STONE SOUR frontman Corey Taylor and bassist Johny Chow. You can now listen to the chat in the YouTube clip below.

Asked whom he would choose as his ideal frontman, Corey said: "[METALLICA's] James [Hetfield] is definitely up there. He's got such a great, unique style. 'Cause he attacks the songs and then he's just like so stoked. He's just, like, 'Yeah, is everybody coming to have fun?' But then you've got people like Diamond Dave [VAN HALEN singer David Lee Roth]; he's one of those ultimates. But, to me, [late QUEEN singer] Freddie Mercury — nobody touches him. He is the gold standard, as far as I'm concerned. Whether it's Bruce, who I love… Dickinson, obviously. Or Bruce Springsteen — both are equally adept at it. But there was something about Freddie that he would just draw all of that positivity — everything, all of that, out of it, and he was just electric from the second he hit the stage. It didn't matter if he was sick or tired or whatever, when he was on, man, it was like you turned a spotlight on and he just shone."

Asked if he ever got a chance to see QUEEN perform live with Freddie Mercury, Corey said: "No. I was so young. I wish. It's one of those things that… I have a handful of live regrets. That's definitely one of 'em. But, to me, I feel that energy, though, and that's the kind of stuff that I wanna bring when I come on the stage. And I hope that people enjoy it as much as I watched him enjoy it."

STONE SOUR is continuing to tour in support of its latest album, "Hydrograd", which was released on June 30 via Roadrunner Records. The disc was recorded at Sphere Studios with producer Jay Ruston, who has previously worked with ANTHRAX and STEEL PANTHER. The band tracked the album live in the studio, cutting a total of 18 songs from which 15 made the CD.