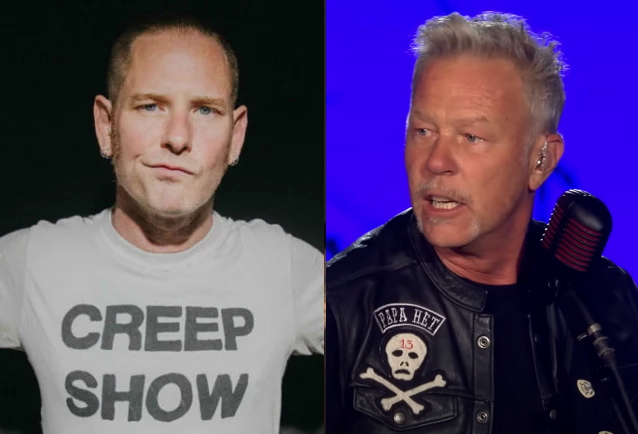 During an appearance this past Tuesday (August 30) on SiriusXM's "Trunk Nation With Eddie Trunk", SLIPKNOT and STONE SOUR frontman Corey Taylor was asked what he thought of METALLICA's breakthrough self-titled album when he first heard it more than three decades ago. The Iowa-born musician, who was 17 at the time of the LP's release, said (as transcribed by BLABBERMOUTH.NET): "It was weird, because it was actually in two stages. I remember studying [the album's first single] 'Enter Sandman' like it was Zapruder film [referring to Abraham Zapruder, who recorded a tragic moment in history when he captured the U.S. president John F. Kennedy's assassination in full color in November 1963]. For real. Me and my friends, we were blown away by the production — just how good it sounded and yet so thick. We were just, like, 'How did they do this? What is this?' And I can remember us just… We taped it off the radio just so we could hear it — before the full album came out. I can remember us trying to tape it off of MTV off the video, just holding a ghetto blaster up to [the TV]. We were, like, 'It sounds like garbage. We've gotta get it off the radio.' So we were sitting there with the 'record' hit and then the 'pause,' and as soon as they cued it up, we were, like, 'Oh, go.' We were waiting all day, 'cause that's what you did back then."

He continued: "We were losing our minds on this song. People have to realize, this was before it became our generation's 'Stairway To Heaven'. We'd never heard anything like it. We were just blown away. And then the album came out, and I was, like, 'Okay. It sounds great. But where's the heavy stuff?' There were songs that definitely came close, like 'Holier Than Thou', which that's one of the reasons why I wanted to cover that when they asked me to a part of 'The [Metallica] BlackList' [a 2021 collection featuring covers of every track off of METALLICA's self-titled album]. … But I was looking for stuff like that [from the rest of the 'Metallica' album], and I wasn't getting that 'Master [Of Puppets]' vibe or that '[…And] Justice [For All]' vibe. I was, like, 'Where is it?' And it took me a long time to really appreciate that album. And I think a lot of people would agree that it probably took the 'Load' albums ['Load' and 'Reload'] coming out for us to go back and go, 'God. What was I thinking? How good does this album sound now?' And that's not knocking those two albums because at the time that was such a departure."

Taylor added: "I remember the first time I heard 'Nothing Else Matters'. The look on my face — my friend went, 'Jesus, you really don't like this song, do you?' 'Cause I had the 'suck' face. I was just, like, 'What the hell is this?' But, of course, over time, man, a good song is a good song, and you can't deny that. And it taught me a very valuable lesson, that you have to force change on people. I mean, nobody likes stuff that's different right away. You have to drag them kicking and screaming into where you need to go, 'cause that's the only way you're gonna get anybody there. Assuming that people are gonna change with you is a lesson in insanity, because there's no way it's going to happen. You have to make the change and just drag the people along with you."

Taylor previously discussed his cover of "Holier Than Thou" and the enduring impact of METALLICA's self-titled LP last September in an interview with Knotfest.com's Ryan J. Downey.

"For me, I was so shocked by the 'Black Album' at first," Corey said. "I was one of those kids that I was expecting something more like '…And Justice For All'. And I can remember listening to 'Sandman' because it was fucking everywhere.

"In retrospect, we were blown away by the single, but we were expecting more from the album," he continued. "And it has grown on me over the years to the point where I can listen to it now and I appreciate that album just as much as I appreciate the first four albums. You can see the evolution. And maybe that's maturity. 'Cause we were young and we were fucking dicks back then. 'This doesn't sound like 'Creeping Death'' or anything like that. It was one of those things where it was different, and we didn't know how to feel about 'different' at the time, especially for a band like this. And then the more attention they got, the less they felt like 'ours' — they were being taken from us. And I think that's why there was such an anti-METALLICA thing for a while amongst us as metal fans. I never turned my back on them but I definitely looked for other things. Because it didn't seem as special and as specifically ours. But that was just me being a kid. They were one of my favorite bands, so I was gonna judge them as such. But it wasn't until I got a little older that I really went back and I started listening to that album again. And I was, like, 'Fuck, man. This thing is really good.' And not even the singles, because those singles got played ad nauseam; they were fucking everywhere. 'Holier Than Thou' is my favorite song on that album. 'The Struggle Within' held up… And I think that once you put that in perspective with where they were going, it all makes sense; that was the missing piece. And they've earned every drop of their success."

Corey previously told Downey that "Enter Sandman" was one of the first songs he ever learned how to play on guitar. "Because that was kind of our generation's 'Stairway To Heaven' or 'Smoke On The Water'," he said. "It's one of those riffs that… I like to call if the Guitar Center virus. Anybody who comes in [at a Guitar Center location] is either playing 'Sandman', 'Crazy Train', 'Smoke On The Water' or 'Stairway' or 'Whole Lotta Love'… You have those gateway riffs where you go, 'Oh, I figured it out.'

"I sat down one day, as I got better at guitar, and I went back and listened to the first four METALLICA albums and just started woodshedding and learning all these riffs. And it became a sort of language that you could speak to other musicians when you're jamming for the first time. If you kicked into 'Blitzkrieg' or something, or if you kicked into 'Ride The Lightning' and just started [playing the opening riffs of the song], and they kicked in with you, you knew you were off to the races, because you don't just learn that riff; you learn the whole tune and you just go for it. So it was almost like an initiation in a weird way; you knew how to do it. So I played METALLICA in almost every band that I've been in; it's always just been there. I mean, from my first sort-of-real band CRIMINAL MISCHIEF all the way up to my solo band."

Taylor's cover version of "Holier Than Thou" is included on the aforementioned "The Metallica Blacklist", a four-hour, 53-song collection of the "Black Album" covers spanning an unbelievably vast range of genres, generations, cultures, continents and more, with each artist contributing a unique interpretation of their favorite "Metallica" LP cut.

In 2020, Taylor told Apple Music's Zane Lowe that METALLICA's longevity and career success have offered a "blueprint" that SLIPKNOT will continue to follow in the years to come.