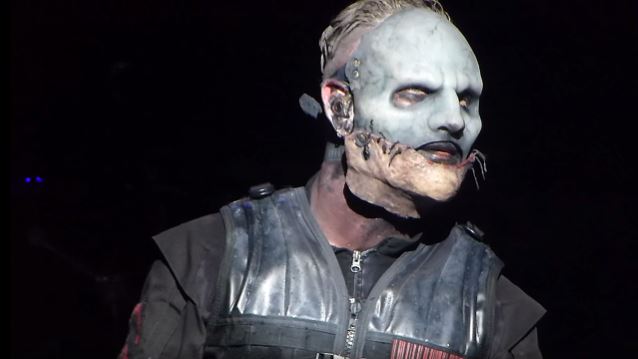 Living Out Loud - LA recently conducted an interview with SLIPKNOT and STONE SOUR singer Corey Taylor. You can now listen to the chat using the SoundCloud widget below. A couple of excerpts follow (transcribed by BLABBERMOUTH.NET).

On SLIPKNOT's split with drummer Joey Jordison in December 2013:

"I mean, it was hard at first. Nothing worth doing is ever easy right out of the gate. When we parted ways with Joe, it was honestly because of necessity; he was going one way and we were going another, and we just couldn't go that way anymore. And honestly, that's all I can really say about it. But I can tell you that starting to move on without him was one of the most difficult things we've ever done. I mean, just as hard, in a lot of ways, as trying to move on without Paul [Gray, late SLIPKNOT bassist]. But, like anything, it takes those first couple of steps, and then it gets a little easier. It doesn't get better by any means, by any stretch of the imagination, but it gets easier. With the new guys [drummer Jay Weinberg and bassist Alessandro 'Vman' Venturella], it's really kind of a 2.0 kind of situation, where it's the second phase of SLIPKNOT's career, basically. And it's different. In a lot of ways, it's more fun, but in a lot of ways, it's bittersweet; it really is. Because you've got two dudes who you kind of went to the trenches with, and you stood on shoulders to kind of get to where you were, and then you lose one and then you have to split with another. And it's hard, man. It's difficult at times. Because you've got two great dudes who you're jamming with right now, but they don't understand a lot of the sacrifice and the toil that went into a lot of it. But at the same time, they have such respect not only for the band, but the music and what we're doing, because they're fans — they started out as fans and they grew up listening to us. So they have absolute respect for what this band is and what it stands for. And they have never asked for too much, stepped on the wrong toes… They are very respectful, and that's huge for us. Coming from Iowa, respect is a big thing, and they have shown it at every stage of the way. So that, in a way, has also made it a little easier for us."

On whether SLIPKNOT felt any pressure while making last year's ".5: The Gray Chapter" album:

"This band is… It's just very unique, and it always has been. There's still a lot of people out in the world who just don't understand what this band is about, and that's kind of fine, because as long as we know, it doesn't matter what anybody else thinks. And I think in a lot of ways, that's why we've been as resilient as we have been. Because we're very aware of what the identity of the band is. Just because a lot of people have a misconception of what this band is about, it doesn't change how we feel about it. And when you have that kind of strong foundation, everything else just kind of balances. We were nervous going into the studio, sure, but we knew we were going to do something special right out of the gate. It might not have been what people expected, but at the same time, we're a band that, if we're not happy with something, we don't release it — straight up. If we don't back it, we're not putting it out there. That's not say that, in retrospect, some of our stuff has been… To us, hindsight is always 20/20, so you look back at some of the stuff you've done and you're, like, 'Hmmm… I don't know about that.' But, for us, in the moment, it's what we're all about. So there wasn't a lot of pressure. It was more pressures for us that we put on ourselves, just to make a great album that we would wanna listen to. We really never paid attention to the outside stuff. It's never gotten in. I mean, that's one of the reasons why we recorded 'Iowa' the way we did, and it's also one of the reasons why we turned around and did 'Vol. 3' the way we wanted fo — just because we wanted to do it that way. So, for us, we've always been very resilient, and maybe, again, this is the reason that we work the way we do. Coming from the Midwest, we've never shied away from hard work — ever. It's one of the reasons why we dug our heels in right out of the gate and were able to establish ourselves on the first album. It's because we never shied away from the work, 'cause that's what it's all about. But the other side of that is that this band is so different. I can't describe what this band is. It's never been easy for me to describe, because, on paper, we should never have made it in the first place. I mean, it's true: we never should have. People should have looked at us and just been, 'What in the fuck is going on here?' On paper, we don't sell four million copies of the first album. It just doesn't make any sense. But this band is different, and we beat all the odds. And I think that's why we continue to beat the odds — because we're just different, man…. Whether you look at this band as theatrical or creative, there's just something that resonates with this band. And whether people hate us or love us, they respect the fact that, after sixteen years, we're still doing it, and we're still doing it bigger than we ever did. I mean, it's insane."

On how he manages to stay involved with so many different projects:

"It's exhausting sometimes, but I'm also the guy that, if I'm not into it, I don't do it — straight up. If I can't find my satisfaction in something, then I pass on it. I've turned down so many different things — different opportunities, different projects and whatnot — just because not only could I not find my place in it, but also because I just don't have the time. And I know that if I don't have the time, I'm not gonna be able to do something to the best of my ability. So, as crazy as it is, I'm able to do a lot of different stuff because I actually have the time to kind of focus on it — whether it's writing books or making albums or touring, or whatever. And honestly, I've gotten to a point in my life where I can afford to bring my family with me, which is a whole different thing. So it's very, very rarely that I don't have my family with me, so I'm very lucky in that respect. And that helps. Just having them to come home to, whether it's walking from the stage to the bus, or pulling up and getting them to bed, it's all good."