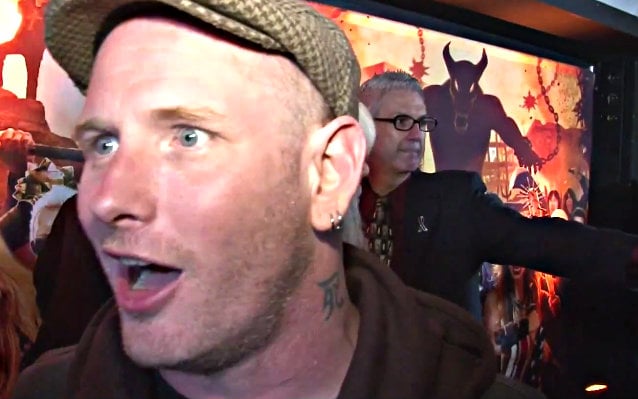 SLIPKNOT and STONE SOUR frontman Corey Taylor was interviewed by Artisan News at this past Monday's (March 17) exclusive VIP listening party for the Ronnie James Dio tribute album "This Is Your Life" and awards gala at the Avalon in Hollywood, California. Check out the chat below.

As previously reported, Taylor shows up briefly in the first trailer for "Fear Clinic", an upcoming horror film in which Taylor makes his acting debut. The film stars Robert Englund, best known as Freddy Krueger in "A Nightmare On Elm Street", as Dr. Andover, a doctor who treats patients afflicted with crippling phobias by inducing hallucinations inside an invention he calls the Fear Chamber.

Taylor told The Pulse Of Radio what it was like to work with a horror icon like Englund. "One of the coolest dudes I've ever met," he said. "You know, we were sitting in the makeup trailer and he's telling me stories from the '80s of being at the Rainbow with GUNS N' ROSES and I'm like, 'Please tell me more!' You know? Sweetest dude I've ever met, super fun, super awesome and we had a really good time like making that stuff. And I had a handful of scenes with him and I, I had a really good time."

In the film, Taylor will play a clinic employee named Bauer who struggles to keep things under control when all hell breaks loose. The movie will center around one traumatic event that induces phobias in a group of different people.

Also appearing in the movie, which began life in 2009 as a five-episode series for the web site FearNet.com, is Lucas Till from "X-Men: First Class", Danielle Harris of "Halloween 4" fame and Kane Hodder, best known for playing Jason in several of the "Friday The 13th" movies.

There is no word yet on a release date for the film, although producers are aiming for Halloween 2014.

Taylor is one of a number of well-known musicians from the metal and hardcore scenes who recently joined forces with singer/bassist Mike Dean and singer/drummer Reed Mullin of hardcore punk veterans CORROSION OF CONFORMITY to create the new project TEENAGE TIME KILLER.

The instrumental parts for the upcoming debut release from TEENAGE TIME KILLER, which is named after a RUDIMENTARY PENI song, were recorded at Dave Grohl's (FOO FIGHTERS, NIRVANA) Studio 606 in Northridge, California on the famous Sound City mixing board, which was the central focus of Grohl's acclaimed "Sound City: Real To Reel" documentary.

Taylor and the rest of SLIPKNOT are currently at the work on the band's first studio album in six years, which should arrive in late 2014.