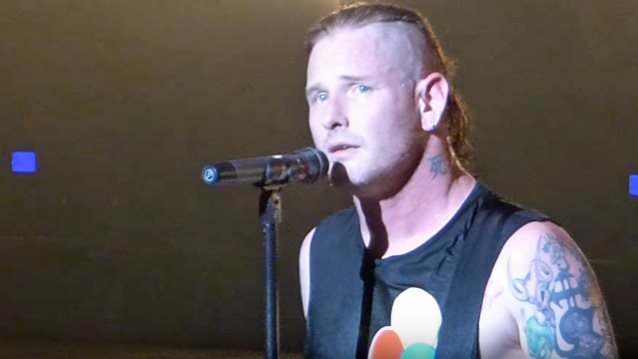 Corey dedicated the song "Through Glass" to the LINKIN PARK frontman at STONE SOUR's show in Mansfield, Massachusetts as the support act for KORN.

"We all lost somebody today," Corey told the fans at the show as his voice trembled with emotion. "I lost a friend… and this was one of his favorite songs. And I wanna dedicate to him. Chester, we will fucking miss you."

Bennington died of an apparent suicide Thursday morning, the Los Angeles County coroner confirmed. He was 41.

The singer struggled with drugs and alcohol for years. He had said in the past he had considered committing suicide because he had been abused as a child by an older male.

This past May, Bennington responded to remarks made by Taylor in which the SLIPKNOT and STONE SOUR singer dressed down Bennington for lashing out at fans who were unhappy with the new LINKIN PARK album, "One More Light". At the time, Taylor told Tucson radio station KFMA: "I would've never said it the way he did, but you get frustrated and you want people to embrace the evolution. At the same time, you should probably be very, very fortunate that people this far along the line still love that music you made... Be fortunate for what you have."

Bennington, who said in interviews that he would like to punch people in their "fucking mouth" who believe his band "sold out" with the pop direction of the new CD, wrote on Twitter: "Just heard Corey Taylor's response to something I said in an interview and I agree with him. I do appreciate our fans." He later added, "I'm human and sometimes take things too personally. Most of our fans have been very positive lately. Some... not so much." He continued that it was "time for me to recalibrate my perspective."

Bennington also told Music Week that LINKIN PARK fans should "move the fuck on" and stop asking the band to return to the sound of its 2000 debut album, "Hybrid Theory".

"One More Light" arrived on May 19 and featured a major shift in direction toward a pop sound from a band which had previously been known for harder music.