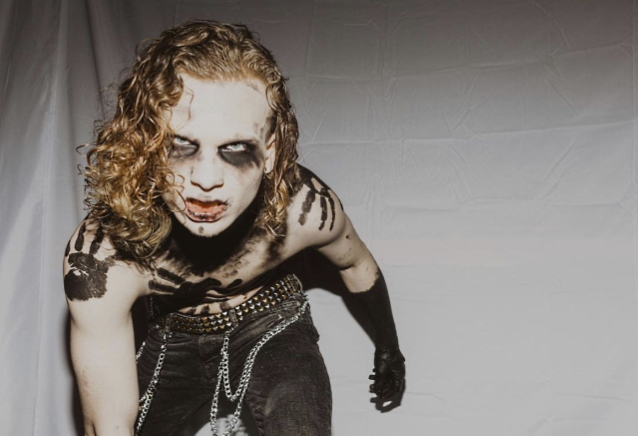 In a recent interview with Knotfest's Ryan J. Downey, Griffin Taylor, the 19-year-old son of SLIPKNOT and STONE SOUR singer Corey Taylor, was asked if he pays attention to the feedback his Iowa-based metal band VENDED has received in the weeks since it released its debut single. He said (as transcribed by BLABBERMOUTH.NET)": "For me, I do see people's responses to it, and I get a lot of great responses, because I love the crowd — I love the fans because they've been there for my dad and they will be there for me and I will not force them to be. But we do get backlash because of the comparison and the similarities [to SLIPKNOT]. But we are different. And there have been times where I've read some hate comments on YouTube and I literally went into the bathtub, filled the bathtub up and just immediately started crying. I was just so fucking in a bad place before we got here. And now I'm in a good place because I'm with my friends."

Griffin, who was accompanied during the interview by his bandmates Cole Espeland (guitar) and Jeremiah Pugh (bass),went on to say that a VENDED full-length album is "in the works" as a follow-up to the "What Is It/Kill It" EP, which came out last month. "We are planning on making an album, making our own projects, making our own videos, personal things," he said. "I've got some things that I've always wanted to do, but right now, since we're so new and since we don't really have the funds, it has to be put on hold. But we do have plans for more stuff. And we've even got more songs that some people don't even know. And we're real excited. And I've been rewriting and writing and just trying to make it perfect so that it speaks from my soul. Because that's all I've ever wanted — is to speak from my soul."

Formed in February of 2018, VENDED exhibits a furiously heavy sound built upon the foundations laid by the speed, power and precision of the rhythm section, layered with ferocious guitars, soul crushing solos and gutteral-yet-melodic vocals that portray the hardships and the harsh realities of life.

VENDED had its first mainstream exposure in 2020 when its performed as part of Knotfest.com's virtual "Pulse Of The Maggots" festival. Their live performance, filmed at The Electric Theatre, has clocked up over 100,000 views on YouTube and garnered the band a swathe of new fans from around the world, eager to hear more from the five-piece.