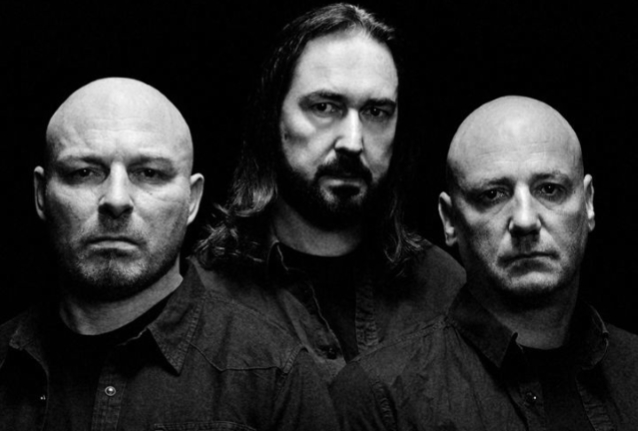 Guitarist Tommy Veterrli (a.k.a. Tommy T. Baron) of Swiss technical thrash masters CORONER says the band will hit the studio in February to record the long-awaited follow-up to 1993's "Grin". The album will be released sometime in 2023 via Century Media Records.

In a recent interview with BLABBERMOUTH.NET, Veterrli shared CORONER's songwriting progress on their sixth studio album. "We're working really hard on it at the moment," he said. "All the songs have to be finished by mid-December. There's one song missing. Pre-production needs to be finished by the end of the year. Then, I have recordings for the upcoming ELUVEITIE album. Ron [Broder, a.k.a. Ron Royce, bass] and I are meeting today to make a plan. We will start recording in the second half of February."

Veterrli was then asked about the direction of the new music and whether it will follow in the path of "Grin", a noticeably less thrash-oriented album than its predecessors. "It's hard to say," he said. "It's more 'Grin' than 'Reborn Through Hate'. For me, these are songs. It's a showcase of what we learned and practiced. Everybody who has heard the pre-production, including the record company, is really happy and thinks that's the way the band should sound. It's more about feel and is song-oriented. The technical stuff is still there, but not the main thing. It's going to be weird, like all CORONER songs. My goal is always to do something I didn't hear one-hundred times before. Most bands are a copy of another band. There are a lot of great bands, but I miss the freshness or originality."

In the 1990s, CORONER caused a stir in the music industry with its progressive and technically sophisticated music style. All over the world, CORONER was considered one of the most unconventional avant-garde metal bands. Today, CORONER is a cult band and is highly respected not only by musicians such as Max Cavalera (SEPULTURA),Franz Treichler (THE YOUNG GODS) and Mille Petrozza (KREATOR),but also by metal fans all over the world.

After the release of "Grin" in 1993, the band split up. Two years later, a best-of album, "Coroner", was released. Sixteen years passed. Then, in 2011, Vetterli, Broder and then-drummer and founding member Marky Edelmann returned to the stage, playing a potpourri of numbers from their albums at concerts.

CORONER in 2014 announced the addition of drummer Diego Rapacchietti to the group's ranks. He made his live debut with CORONER on May 29, 2014, at Salzhaus in Winterthur, Switzerland.