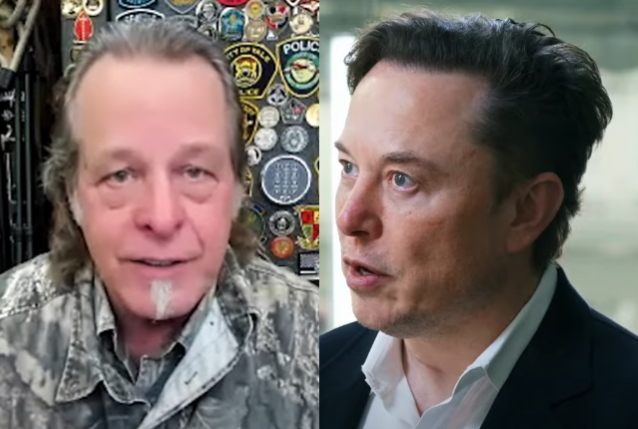 Ted Nugent has weighed in on Elon Musk's acquisition of Twitter, saying that he is "extremely suspicious" of the tech billionaire following his takeover of the social media platform.

Musk, who is CEO of automaker Tesla and reusable rocket maker SpaceX, completed the $44 billion acquisition of Twitter on October 28. The self-declared "free-speech absolutist" is expected to overhaul the company's approach to policing speech online, including easing its content moderation efforts.

Nugent, who has repeatedly railed against large social-media companies that block users from their platforms, addressed Musk's purchase of Twitter on the latest edition of "The Nightly Nuge", a news-style clip in which Ted offers his take on the news of our world every night,

The 73-year-old said: "Well, obviously, number one, the founding fathers wrote down that the king can't censor us; the king can't control our religious choices or non-religious choices; the king can't allow his jackbooted thugs to come into our homes without probably cause; the king can't keep us from protesting immoral, illegitimate, wrong decrees. That's the first amendment. So, obviously, I don't really even have to comment, because everybody knows, if they've been paying to Ted Nugent, I am exactly what the founding fathers wanted every American to be: critical thinking, suspicious of all authority and hold my elected employees constitutionally accountable to the very spirit of those unambiguous words that we will find in the sacred Bill Of Rights.

"Yes, we are experiencing a hiccup where the shackles have come off and we are experiencing non-censored communication, at least on Twitter, for the moment," Ted continued. "But I am extremely suspicious of Elon Musk. Has he done some great things? I think the fact that he fact-checked and put their own little dirty game back on those who created the dirty game, especially the commander in chief, syllable-challenged goofball who thinks he's the president," Nugent added, referencing the fact that President Joe Biden recently posted a tweet regarding "facts" about corporations making billions without paying taxes and how his so-called "Inflation Reduction Act" "puts an end to" it, earning him a fact-checking label from Twitter which provided context. "So that was a good gesture, a good moment, a good indicator. But my friends, remain vigilant; remain suspicious. Elon Musk has a vapor trail of globalist connections. So with that in mind, do not be confused by what Mr. Left Hand is doing, because Mr. Right Hand may be grabbing you by the posterior."

Ted is an ardent supporter of former U.S. president Donald Trump who was famously suspended from his social accounts in January 2021 over public safety concerns in the wake of the Capitol riot.

The outspoken conservative rocker has repeatedly voiced his unsubstantiated accusations that tech companies are censoring his speech, including during the September 22 edition of "The Nightly Nuge". Responding to co-host Keith Mark's claim that Meta chief product officer Chris Cox "on behalf of Facebook admitted" in a recent hearing "that there was collusion to thwart the First Amendment rights of a lot of Americans, but he justified it because it was for a greater good," Nugent said: "Well, that's right out of the communist playbook and straight out of rules for radicals by Saul Alinsky, where they can cripple truth, logic and common sense and freedom and life, liberty and pursuit of happiness by censoring people who fight for, exercise and preach truth, logic and common sense. When you censor a segment of society who is about God, family, country, Constitution, Bill Of Rights, being the best that you can be… But that's really not what the First Amendment protects; the First Amendment, it was proven in the Hustler magazine thing [Editor's note: The U.S. Supreme Court voted unanimously in 1988 to overturn a $200,000 judgment awarded to the Rev. Jerry Falwell for his emotional distress at having been parodied in Hustler, a pornographic magazine.], the court system, the First Amendment is about protecting the most offensive speech, the most unfriendly speech, the most uncommon speech."

"So, finally the truth came out that they're admitting they're censoring and denying First Amendment rights, which I think is against the law," Ted continued. "The U.S. Constitution is the foundation of our law.

"I'm telling you, this is a pivotal moment.

"When I first started out on Facebook years ago — I don't think they really knew enough about Ted Nugent yet — because during the late, late… well, I guess it was in the 2000s, I had between 25 million and 36 million reach on Facebook," Nugent added. "And then the Big Tech America haters finally figured out that I was a truth, logic and common sense guy. So I went from 36 million to 3.6 million overnight. And now even with 3.6 million on Facebook, they reduce it to 15 — not 15 million, not 15 hundred; 15. Sometimes I'll make a statement that is irrefutably true, and they'll censor it and suppress it down to a couple of dozen people.

"So Big Tech, here's a word from good families of America, Big Tech. You people suck. Your fact checkers are psychopathic liars. Your fact checking is dishonest and it's against the law and it's against the First Amendment and it trounces freedom of speech. Shame on you idiots at Facebook and Big Tech. You are bad, bad people, because when you suppress freedom of speech, you're anti-human, you're anti-American, you are a voice and a power of communism. 'For the greater good.' And Big Tech hates the Constitution. I think those that are involved in the power of Big Tech, I think they look at the Constitution as toilet paper. I think we should look at them as toilet paper."

Defenders of the technology industry have repeatedly said that private companies cannot be forced to host speech they don't agree with. They also argue that private owners should be able to do as they please with their own property. In addition, they note that social media companies can only decide what speech they host and present. Those unsatisfied with their choices can choose to read or contribute elsewhere.

Earlier this year, Trump launched Truth Social, the Twitter alternative. Trump has since used the platform to post, including spreading further misinformation, such as the ongoing false claim that Joe Biden's 2020 election win was fraudulent.

Trump had consistently attacked the media throughout his presidency and called the press the "enemy of the people." He also regularly accused reporters of spreading "fake news" — his term for stories he dislikes. In addition, he has assailed the news media at rallies and even at more formal presidential events, encouraging his audiences to chant "CNN sucks!"

This past January, Nugent once again repeated the baseless conspiracy theory that the riot at the U.S. Capitol was orchestrated by undercover FBI agents, Antifa and Black Lives Matter.

Nugent, who has refused to take the vaccine, has falsely claimed that public health measures taken during the COVID-19 pandemic violate the Nuremberg code, a set of medical experimentation guidelines set after World War Two, as the vaccine is "experimental."

In the past, Nugent, who battled COVID-19 in April 2021, had referred to the virus as a "leftist scam to destroy" Trump. He had also repeated a narrative pushed by conservative media and disputed by health experts that suggests the official death count from the coronavirus is inflated.