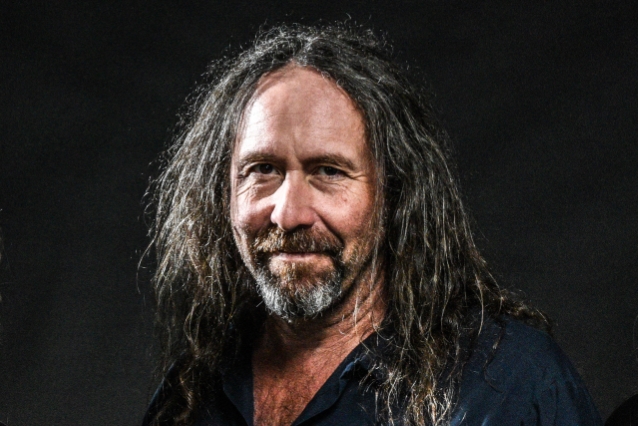 Prior to CORROSION OF CONFORMITY's performance in Cardiff, Wales on November 3, guitarist Woody Weatherman spoke with Metal Underground. The full conversation can be viewed below. A few excerpts follow (as transcribed by BLABBERMOUTH.NET):

On their latest album, "No Cross No Crown":

Woody: "We had a lot of material. We left a few things on the table, but we wanted to make a full album — front to back, something you could listen to. I guess it clocks in a little over an hour, but it's not super-long. Actually, we were kind of done with what we had, and our producer, John Custer, who we've been working with since the 'Blind' album, he's been asking us for years — he's been begging us to do a QUEEN song. That was one of the last things we did — 'Son And Daughter', the last song on the record. I guess it kind of pushed it over the top time-wise... It's kind of a culmination. We never want to make the same record twice, but you can tell it's C.O.C."

On how the band's writing process changed since 2005's "In The Arms Of God":

Woody: "'In The Arms Of God', we were in the rehearsal space working on that record for quite a while, demoing it several times. This album, we didn't approach it like that — we pretty much went in the studio and wrote and recorded as we went along. We would go in with ideas in our head at the beginning of the day, and at the end of the day, walk out with a song on tape that didn't exist before. From that perspective, it was a little different. We talked about it when we went it — 'Where are we going to jump off? Where's our leap-off platform?' 'Arms Of God' was like, well, let's get our minds there where we left off and sort of progress from there. Once you get into it, those ideas sort of fall to the wayside, and whatever comes out comes out. It was a fun way to do a record. I'd like to do one like that again."

Woody: "We've always said we're super lucky to have the fans we do, because they're not fickle fans. They don't like the band for, like, a year and move on. The dudes that come out, some have been fans for thirty-plus years, and then there's always the new folks too, or the old guys are bringing their kid, or whatever it is... Some of those guys have grown with the band. It's cool. For us, our mantra when we start thinking about new music and whatnot, we don't go check what's the hottest shit, so to speak, at the moment. We're never chasing stuff like that. Whatever comes naturally is our thing. We've never jumped on any bandwagons. We never tried that. I think that's why [after] 36, 37 years, we're still here."

On drummer Reed Mullin, who hasn't participated in some of the group's recent tours:

Woody: "John Green from Manchester has been traveling with us for quite a while. Reed had surgery earlier in the year, and he's having some health problems. We're wishing him well, but he's not here. I hope [he'll return]. We'll wait and see how he does. He's working on it. Reed did quite a bit of touring with us when this [cycle] kicked off, and his knee started giving him grief. We're all getting a couple years long in the tooth, but the drummers have it the worst. Knees start going out and shoulders and elbows... shit happens, but we're wishing him the best."

CORROSION OF CONFORMITY recently announced an early 2019 American tour with CROWBAR and MOTHERSHIP, which also includes WEEDEATER and THE OBSESSED on select dates.

"No Cross No Crown" came out in January via Nuclear Blast Entertainment. The LP — recorded in North Carolina with longtime producer John Custer — is the group's first studio effort with guitarist/vocalist Pepper Keenan in more than a decade.