Big Machine Records, home to country superstars such as Taylor Swift and Tim McGraw has teamed up in a joint venture with Mötley Records and Eleven Seven Music for the July 9 release of a country music tribute to MÖTLEY CRÜE. "Nashville Outlaws: A Tribute To Mötley Crüe" includes fresh country takes of 15 of MÖTLEY CRÜE's biggest hits. Artists on the album include Rascal Fatts, LeAnne Rimes, FLORIDA GEORGIA LINE, THE MAVERICKS, Darius Rucker, Gretchen Wilson and more.

Big Machine founder and CEO, Scott Borchetta, is among the legion of country music fans who love MÖTLEY CRÜE.

Neil recently admitted to The Tennessean that when he was first approached by management about the country-music tribute, he wasn't immediately sure it was a good idea.

"I was like, 'Eh, I don't know. Let me think about this one for a minute,'" he told The Tennessean. "The more I thought about it, the cooler it got, especially after Carrie Underwood did 'Home Sweet Home', and that was so good. I'm thinking to myself, 'How cool would it be to hear these other acts' renditions of the songs?'"

Until the country-music-tribute idea first came up, Neil hadn't heard of many of the artists who will appear on the set. "It's fun, because my girlfriend is a country girl," Neil said. "She's a barrel rider in the rodeo. When I showed her the names, she was like, 'Oh my God. Oh my God. Oh my God.' I'm like, 'Tell me, tell me. Fill me in.'"

He added: "I'm an old classic rock and roll guy. The really cool thing is I think a lot of people have heard of the name MÖTLEY CRÜE, but don't put the music to the face. I think it's going to bring a lot of fans that aren't MÖTLEY fans in. It will make them go, 'Oh yeah, I've heard that song before.'" 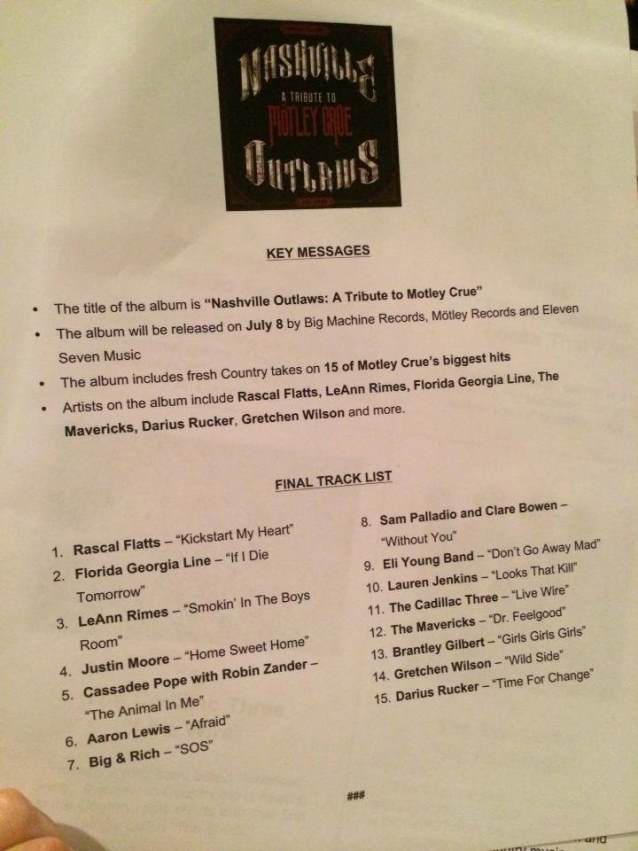