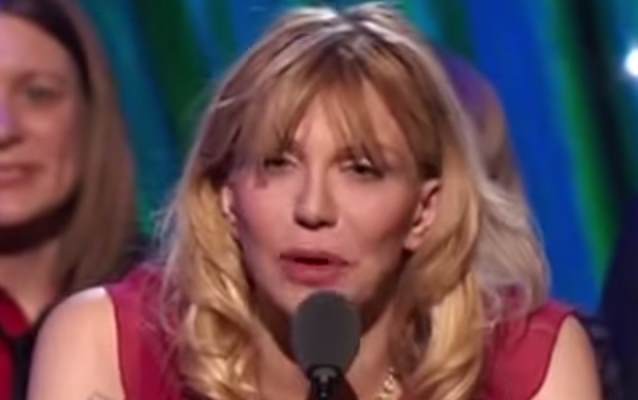 According to The Pulse Of Radio, Courtney Love said in a new interview with Pitchfork that her late husband, NIRVANA frontman Kurt Cobain, would have "loved" the band's induction into the Rock And Roll Hall Of Fame last month, at which the surviving members of the group played several NIRVANA songs with female rockers Joan Jett, Kim Gordon, St. Vincent and Lorde all taking turns at the microphone.

Love said, "Initially, I thought it was sexist, and a little bit ghettoizing. But then I was like, 'No, Kurt would have loved this.'" Love added, "Kim gave the punkest performance, the one that Kurt would’ve approved of the most. It was the punkest thing the Rock And Roll Hall Of Fame has ever seen. I was really proud of that."

Love also discussed making peace with NIRVANA drummer and FOO FIGHTERS frontman Dave Grohl after 20 years of sniping at each other, saying, "I saw Grohl, and Grohl saw me, and he came up to me first — which really pissed me off, because I was going to go up to him first. [Laughs] I wanted to beat him to the punch. I was like, 'All right, no matter what happens, we're not going to be bitches'... We just both knew it was time to let it go, and we were ready to do it."

Although Love has hinted at doing a HOLE reunion next year, she admitted that she is not too fond of the alternative rock reunion circuit, explaining, "I can’t live on the oldies circuit... It would only mean anything if we did something relevant."

Love recently released two new songs, "You Know My Name" and "Wedding Day", from an album she tentatively plans to release later this year.