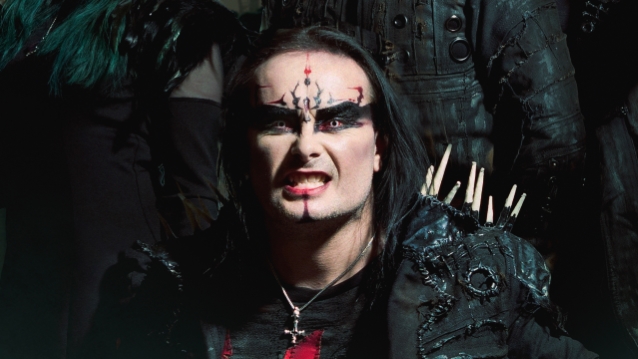 CRADLE's most iconic piece of merchandise was first released in 1993 and spent most of the ensuing decade as a lightning rod for arguments about freedom of speech, and was the cause of several arrests for public indecency.

Speaking about how the idea for the shirt came about, Dani said: "It started off as, rather than a Satanic thing, it was more anarchic. It was, I guess, in response to growing up with a predominantly Christian background. It was never too bad for me, but I know for a lot of people, it was very stifling — people forced to go to communion and church. Obviously, it was worse for a lot of people in America, especially the Bible Belt. Yeah, it was an anarchic statement more than Satanic. And when we came up with it, we were laughing our asses off — we thought it was hilarious, and I think it still is hilarious… That shirt is 30 years old, and I think it's just grown in popularity."

Attempting to explain the T-shirt's appeal, Dani said: "I think people like being scared. But for people who don't understand the band, I don't want them thinking that we're just a shock-rock band, 'cause that's far from the truth. I think, obviously, the 'Jesus' shirt has overshadowed everything merchandise-wise, just because by nature of people's reaction to it and the sensitivity to the wording. But for one of those shirts, there's a dozen other shirts that are very classically minded in art form."

The "Jesus Is A C**t" shirt has been a source of controversy for more than two decades, with the CRADLE OF FILTH members previously warning fans about wearing the shirt in public.

"It's a dangerous T-shirt to wear, full-stop," Filth told Rolling Stone in 2015. "I did walk around in it back in the day, but people don't understand that there's a time and a place for this sort of thing."

In 1996, a CRADLE fan was arrested in London for wearing the T-shirt; he was found guilty of committing "Profane Representation under the 1839 Act" and was fined £150. A year later, the group's drummer was arrested for creating a public disorder and resisting arrest in Dover as he and his bandmates attempted to leave the country for a gig in the Netherlands. In 2008, the shirt was officially banned in New Zealand by the country's office of the chief censor, which stated that, "The injury to the public good that is likely to be caused by the availability of this T-shirt originates from the manner in which it associates an aggressive and misogynistic meaning of the 'harsh, brutal and generally unacceptable' word c**t with Jesus Christ, and depicts an image of a chaste woman engaging in sexual activity."