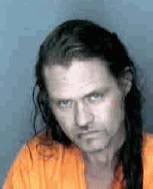 According to the web site of the Sarasota County Sheriff's Office, CRIMSON GLORY frontman John Patrick Jr. "Midnight" McDonald was arrested last Saturday night, January 20 in Sarasota, Florida and charged with "DUI [driving under the influence] with .20 [blood-alcohol level] or higher or having a passenger under 18" years of age. He was also cited for driving with a suspended/cancelled/revoked license. Bond for the 44-year-old vocalist — who gave his occupation as "painter" to the authorities at the time of the arrest — was set at $1,500. He is scheduled to be arraigned on February 8.

Midnight last fall posted audio samples of three acoustic songs from his "M2 - Descending Into Madness" solo effort, which was issued in May 2006 as a limited-edition release (limited to only 112 copies) via his official web site. Check out the samples at Midnight's MySpace page.