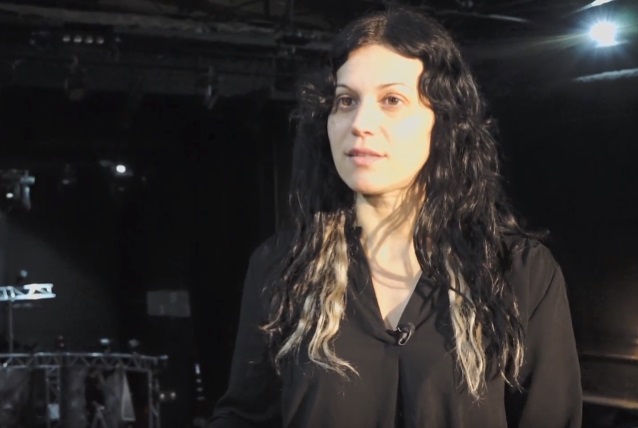 Greece's Rockpages.gr recently conducted an interview with singer Cristina Scabbia of Italian heavy rockers LACUNA COIL. You can now watch the chat below.

Asked if the spate of recent concert terrorist attacks — including those in Las Vegas, Manchester and Paris — have affected the way she approaches her live performances, Cristina said: "To be honest, I am so focused on the stage and the crowd coming to show that I don't think about it. I think this is the goal of the people who want to create chaos — they want us to be in fear.

"It's really horrible, because no one in a million years would have thought that music or a concert could be connected with a terrorist attack," she continued. "This is the thing that weirded everything out, because terrorist attacks are horrible [in and of themselves] but [even more so when] connected to a moment where people should [be] more connected than ever and having a good time and sharing good vibes. This is unbelievable; it's hard to believe, for sure, that something like that could happen."

Cristina added: "So, I am not afraid, and not because I wanna be cocky, but I'm very… I don't know if the word in English is correct, but I'm very fatalist — I know that my life could end in any moment, so I want to enjoy every second, I want to try to spread positive energy around me and try to make whoever comes to the show feel good, to whoever I talk to to feel good. So I don't think about what could happen, because I can't read into the future. Hopefully nothing like that will happen again — not only at a concert, but ever."