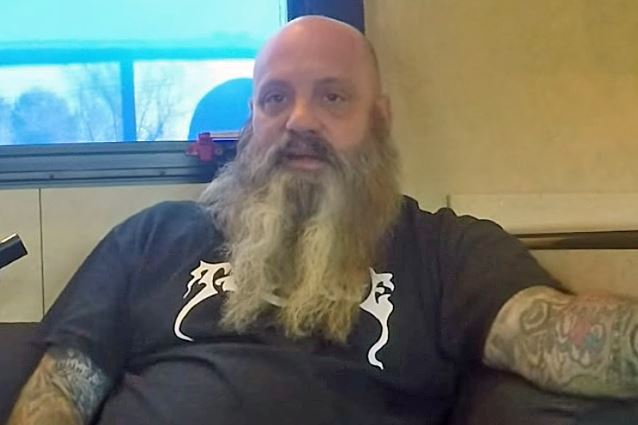 CROWBAR's Next Album To Arrive At The End Of September

On July 25, Metal Wani's Jackie Mtz conducted an interview with CROWBAR frontman Kirk Windstein at the Mesa, Arizona stop of the band's "One Foot In The Grave" tour with CARCASS. You can now watch the chat below. A couple of excerpts follow (transcribed by BLABBERMOUTH.NET).

On the status of CROWBAR's follow-up to 2014's "Symmetry In Black" album:

Kirk: "Well, the label [eOne Music] just received it Friday. Scott Givens, one of the guys that's higher up at the label, I woke up to his e-mail, which was, 'Kirk, the new album is amazing. I'm on track number 7. It's some of the best work you've ever done, my friend. I can't wait to get this out.' So that was a great thing to wake up to, to start the day. So we're pumped up. The record, it's done. We have a title, but I'm not allowed to say it yet. And artwork is being worked on; all that type of stuff. The record itself, the mastered and mixed copy and files and all that kind of business have been turned in to the label. So we're shooting for September 30 as a release date, and I think we will be able to make the deadline to release it then. Which is perfect, because we'll be on tour from September 13th until October 22nd, so that'll give us three weeks of touring with the record being already out, where you can purchase it. So that'll work out great."

On the musical direction of CROWBAR's next album:

Kirk: "To me, it's a fresh old-school-sounding CROWBAR record. I mean, for me personally, I went back and started listening to older CROWBAR records, songs that I forgot we even have. We have a hundred-something songs, ones that we don't play live. I couldn't even name you every song on every record, other than maybe 'Symmetry' and [2011's] 'Sever The Wicked Hand', 'cause they're newer records. I went back and listened to a lot of older stuff, and I made a real conscious decision to listen to the bands that inspired CROWBAR in the first place, that we looked up to. I've been listening to a lot of TROUBLE and the first TYPE O [NEGATIVE] record, CARNIVORE, MELVINS, stuff like that… Those were the bands… SAINT VITUS… That was all a part of what created the style that we wanted our band to be — it was those bands. So I listened to a lot of that stuff. So, to me, with 'Sever The Wicked Hand', we brought a lot of new elements in, and especially with 'Symmetry', I thought we'd expanded our sound a bit. So, with the new one, there are new elements, but at the same time, to me, it feels like a fresh, 2016 old-school album. It's more mature — writing-wise, to me, lyrically, whatnot — but the approach was kind of back to basics, back to the way we were in the old days. And we're super pleased with it. It's great."

Strange made his return to the group sixteen years after his initial departure from CROWBAR.

CROWBAR announced in June that it had parted ways with its bassist of less than three years, Jeff Golden.

The band's new album was recorded at OCD Recording And Production in Metairie, Louisiana with engineer/producer Duane Simoneaux