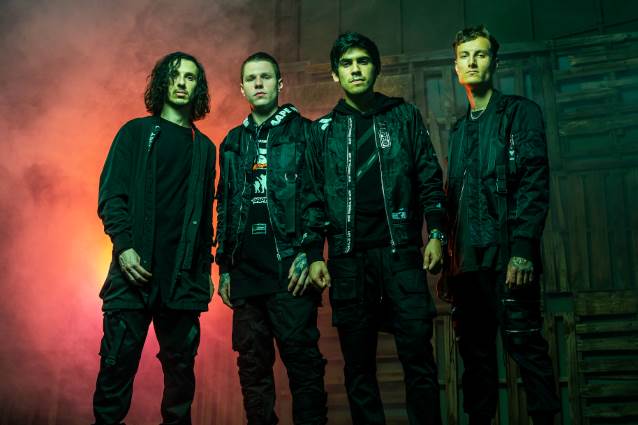 CROWN THE EMPIRE has dropped the absolutely epic new song and video for "20/20". This marks the band's first new music since the release of the 2016 fan favorite "Retrograde".

"I started to feel like I was living in a world where, even though we're more connected than ever, I felt more alone than ever," said singer Andy Leo about the personal and poignant track."It's too easy to point the finger at vanity and self-obsession in technology, all the while being just as much a part of it."

Leo continued: "This is a letter to myself to remind me that I'm still human first. Thanks to everyone for sticking with CROWN this far. I hope you enjoy this one."

CROWN THE EMPIRE initially previewed the track to overwhelming audience enthusiasm while supporting ASKING ALEXANDRIA and BLACK VEIL BRIDES in front of packed houses nightly this past January. The song amplifies the hallmarks of their signature sound — swinging from evocative and emotionally charged verses into sweeping hooks backed by robust riffing and cinematic electronics. The video, with its provocative sci-fi narrative, perfectly captures this like an episode of Netflix's "Black Mirror" gone hard rock.

The Dallas, Texas band is spending its summer on the final traveling edition of the Vans Warped Tour, which runs through August. They will then head over to Europe from September 18 through October 12.

CROWN THE EMPIRE will announce further details about its next album, due out via Rise Records, shortly.

CROWN THE EMPIRE is:

Find more on Crown the empire