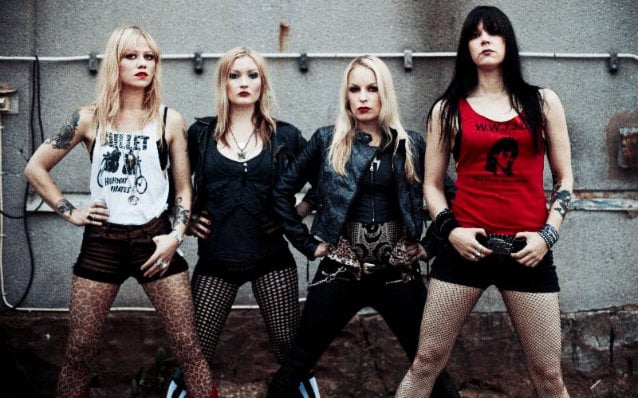 Swedish female rockers CRUCIFIED BARBARA continue their worldwide takeover with the May 19 release of their new single, "Lunatic #1", taken from the band's latest album, "In the Red", available now on Despotz Records. The frantically paced track has an accompanying video, directed by Magnus Ewald, featuring the girls running through a pasture, intercut with live shots taken from a special performance for select fans at Stockholm's Stampen club. Check it out below.

Comments CRUCIFIED BARBARA frontwoman Mia Coldheart: "This is one of our favorite tracks on the album. It's fun and powerful to play live and brings energy to the crowd! The lyrics are about being in a team with someone special and together you become unstoppable — invincible!"

She continues: "'Lunatic' is named after one of the best show jumping horses in Sweden. I met his rider, Jens Fredricson, two years ago and he talked about how much you need to work and dedicate time to reach your goals and the top, and the inspiring meeting with him gave me the final strength and inspiration I needed to give 110% to finish the 'In The Red' album. I thought the name of his best team player would be perfect to name this song. Together, all of us in the band made our best album so far."

"In The Red" was released on September 15, 2014. The CD was recorded at Music A Matic studio in Gothenburg with producer Chips Kiesby and engineer Henryk Lip, and is the follow-up to 2012's "The Midnight Chase".

In a recent interview with Metal Underground, Mia stated about the new CD: "We have taken our songwriting to a higher level. We have worked harder on the grooves and vocal melodies this time."

She continued: "We never had any rules when writing our songs to force them in any directions or genres, and this time when we wrote during this concentrated period of time, we were a bit afraid that all songs would sound the same. But we worked really hard on each song and didn't leave it until we were really satisfied with it, and the result, I think, is our best album so far and full of songs with life of their own that don't sound the same at all."