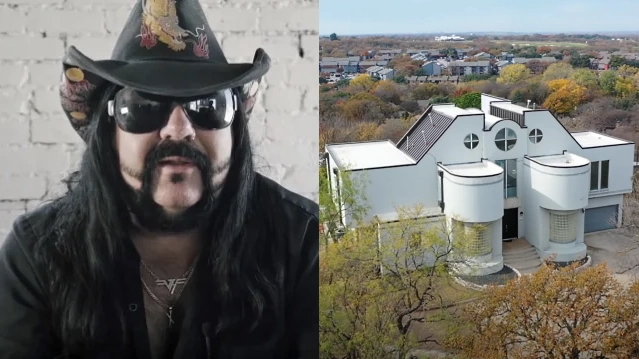 Current Owner Of VINNIE PAUL's Home In Texas: 'It Was Meant To Be A Party House'

The current owner of the Arlington, Texas home that was once owned by late PANTERA drummer Vinnie Paul Abbott recently listed the property for $750,000.

Vinnie Paul designed the 3,784-square-foot home, which sits on 1.5 acres and offers expansive views of Arlington, downtown Fort Worth and Las Colinas.

Chris Johnston, co-owner of Texas Best Home Buyers and who is selling the home with his son, Christopher, told The Dallas Morning News the property will interest music and sports lovers, as well as local history buffs.

"I've been in real estate a long time, and I've never seen anything like this house," Johnston said. "It was not built to be a family home. It was meant to be a party house."

The secluded hilltop house, which was completed in 1995, features 40-plus-foot ceilings, four bedrooms, four and a half baths, two game rooms and a secret/safe room. The home has four newer, over-sized Lennox Elite AC units and a gas-operated Generac generator. The backyard features a large pool with waterfall and a spa that spills into the pool. Two fire pits are on each end of the waterfall.

Check it out, our company was mentioned in The Dallas Morning News!!! ...