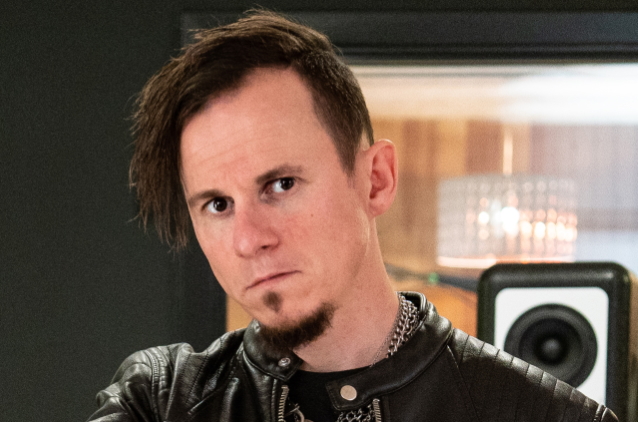 CYHRA's JAKE E: 'I Want To Become The Next IRON MAIDEN'

JJ's One Girl Band recently conducted an interview with vocalist Jake E (ex-AMARANTHE) of multi-national pop metallers CYHRA. You can watch the entire chat below. A few excerpts follow (transcribed by BLABBERMOUTH.NET).

On the origins of the CYHRA name:

Jake: "What was most important was we needed to find a band name that, as I used to call it, was 'search engine optimized,' that, in a sense when you're searching for us on Google, we will be the first thing that comes up. I think that's very important nowadays when the Internet is what it is. Everything is going through the Internet. But, also, my daughter's name is Celine, which also means moon. It was a different combination. I wanted to do a homage to my daughter, then we also added the 'h' in the middle so it was a standalone name. Let's take the word 'seventh' for example. There's a lot of bands that use that. There's SEVENTH KINGDOM, SEVENTH WONDER… all great bands, but they get mixed up in the search engine. You want to have something that stands out, that you're alone to have. It doesn't matter if you have two fans or one hundred thousand fans because Google is optimizing it on how many people are searching for your word if there are many of them."

Jake: "Usually — I can only speak for myself — I sit down and either I'm on the piano or the guitar, and I make chord structures. Then I sing some gibberish vocal lines over that. For me, the vocal line is what is most essential in a song. I don't focus on lyrics at that point. I only focus on making the melodies sound right. Then I always work a little bit backward and forwards at the same time. I never start in the beginning and drop off in the end. You can sometimes start writing chords for a chorus, make the vocal line on that and see what else I can do, like what goes great into that chorus. Sometimes it works the other way around where I do the first verse, then try to find another chorus. Then sometimes me and Jesper [Strömblad, guitar] sit together. He comes with a riff, we start working out on that, or Euge [Valovirta, guitar] does the same. We're sending a lot of things back and forth. Sometimes we're sitting in my studio, sometimes we're just bombarding each other with ideas, then we're cutting them together. A lot of different ways of writing songs nowadays in modern times."

On his advice for young bands who want to have a successful career in music:

Jake: "First of all, make sure that you play with people that want the same thing as you. Make that clear from the beginning, because it takes a couple of years from the day you start a band until you get your first record contract until you get your first tour and so on and so forth. But, also, put your goal in your head. I've always put my goals to a point that is probably unreachable. I want to become the next IRON MAIDEN. Obviously, the chance of me getting to be the new IRON MAIDEN is pretty small, but if I can come halfway, then I made it pretty big anyway. But if you're just having the goal of, 'Yeah, next year we're going to have a show at the local pizzeria.' Then you're maybe not even going to come to the pizzeria. And, also, never give up. Because you're going to hit so many obstacles along your way in the music business. You're going to be fucked over, you're going to release a good album that did not get any promotion. Don't just sit down and feel sad about yourself. Just do it again. Get up on ten and do it again. It's not an easy business to succeed in, but if you're just fighting enough and believing in yourself, things will go the way you want."

On his biggest goal for CYHRA:

Jake: "As I've said throughout my career: To have IRON MAIDEN opening up for us. [Laughs]"

CYHRA's second album, "No Halos In Hell", was released on November 15 via Nuclear Blast Records.

CYHRA recently announced Strömblad will be sitting out the band's live performances. Filling in for him is Marcus Sunesson, who has previously played with ENGEL.