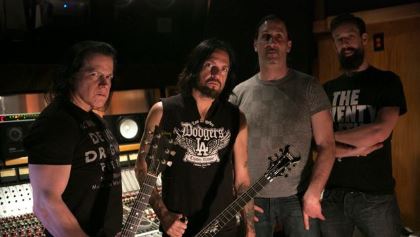 Glenn Danzig was in a Los Angeles-area recording studio on Monday (March 16) with guitarist Tommy Victor and drummer Johnny Kelly laying down tracks for the upcoming DANZIG album, tentatively due in late 2015 or early 2016.

Not to be confused with Glenn's "covers" record, which is scheduled for a late spring release, this will be the first all-new material by DANZIG since 2010's "Deth Red Sabaoth" album.

Check out photos from the studio below.

As previously reported, Glenn's "Danzig Legacy" special — which was filmed in May 2012 in Glendale, California with director Mark Brooks (Adult Swim's "Metalocalypse") — will be made available in a few weeks via Vimeo. Brooks and Danzig finished all editing and post EFX and "it came out epic," according to a posting on Danzig's official web site.

"Deth Red Sabaoth" sold 11,700 copies in the United States in its first week of release to land at position No. 35 on The Billboard 200 chart.