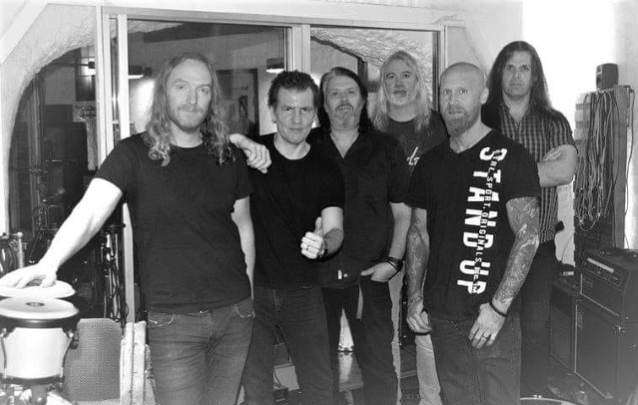 The two musicians, who have been members of DARK TRANQUILLITY's touring lineup since 2017, will make their recording debut with the band on their upcoming follow-up to 2016's "Atoma" album, tentatively due before the end of the year.

He wrote: "A new cycle begins…

"Today marks the first day of recording our new album.

"In these uncertain times all we can do is try to channel this frustration, fear, and anxiety into music and words. Isolation can be a strong motivator and we are commited to making this the best it can possibly be.

"With us this time we have two fantastic musicians who have been on tour with us for quite some time and we are now proud to announce as proper real members of DARK TRANQUILLITY; Chris Amott and Johan Reinholdz. They have been incredible additions to our live shows and now we cannot wait to hear what their collective musicianship and skill will add to this album.

"Stay tuned as we will update you on the progress of the recording and stays safe out there!"

Founding DARK TRANQUILLITY guitarist Niklas Sundin announced his departure from the band last week, explaining in a statement that he "always enjoyed the creative process more than the performance aspects of being in a band, and the required extensive touring held less and less appeal with every album."

Today marks the first day of recording our new album.

In these uncertain times all we can do is...