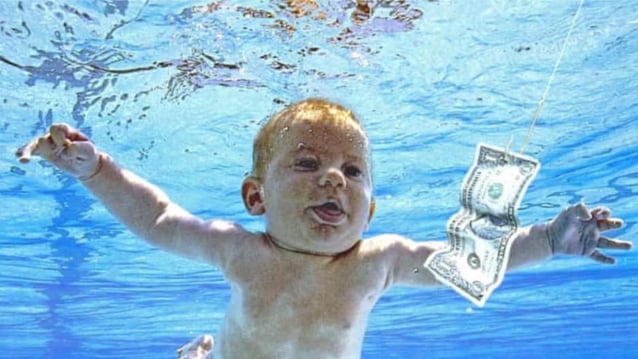 Dave Grohl says that he is open to the idea of changing the cover of "Nevermind" for any subsequent reissues of the iconic NIRVANA album.

The former NIRVANA drummer touched upon the prospect of a new "Nevermind" cover while speaking to The Sunday Times about the lawsuit filed by Spencer Elden, the man who claims he was the baby featured in the image, against the surviving members of NIRVANA as well as the estate of Kurt Cobain. Elden alleges the photo of the baby reaching for a dollar in a swimming pool violated federal child pornography statutes and argues child sexual exploitation.

Regarding the "Nevermind" artwork, Grohl said: "I have many ideas of how we should alter that cover, but we'll see what happens. We'll let you know. I'm sure we'll come up with something good."

As for how the lawsuit might pan out, Grohl said that he isn't overly concerned. "I think that there's much more to look forward to and much more to life than getting bogged down in those kinds of things," he explained. "And, fortunately, I don't have to do the paperwork."

The attorneys said that they plan on continuing the legal proceedings in order to "bring long-awaited privacy and dignity back to our client."

A deluxe 30th-anniversary reissue of "Nevermind" is due on November 12. Pre-orders for the set still show the album with its original cover artwork.

In Elden's complaint filed in Los Angeles federal court, which also named photographer Kirk Weddle and the various record companies behind the album's release, Elden claimed that his "identity and legal name are forever tied to the commercial sexual exploitation he experienced as a minor which has been distributed and sold worldwide from the time he was a baby to the present day."

Elden claimed that his parents never signed a release authorizing the use of the photos, which were taken in a Pasadena aquatic center in 1990. He alleges that the band promised to cover his genitals with a sticker, which was never incorporated into the album art.

"To ensure the album cover would trigger a visceral sexual response from the viewer, Weddle activated Spencer's 'gag reflex' before throwing him underwater in poses highlighting and emphasizing Spencer's exposed genitals," the complaint stated.

Elden is seeking damages of either $150,000 from each of the 17 defendants or unspecified damages to be determined at trial, attorney fees, an injunction to prohibit all parties "from continuing to engage in the unlawful acts and practices described herein," and a trial by jury.