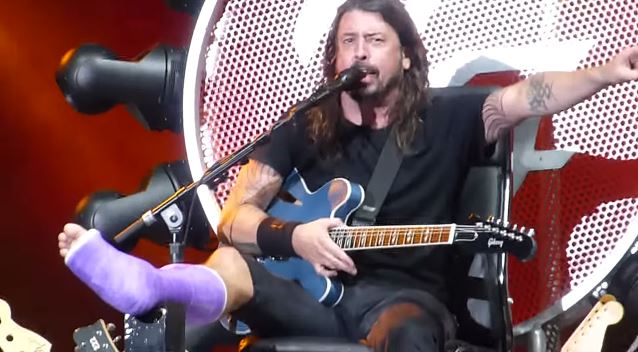 According to The Pulse Of Radio, FOO FIGHTERS mainman Dave Grohl told Q magazine that he is doing his own physical therapy for his broken leg along with what the doctors ordered. Grohl said: "Ever since I started playing the drums, my right calf muscle has been twice the size of my left from stomping the hell out of my kick drum pedal. Now it looks like a sad little chicken wing, so I've been doing a little bit of my own rehab therapy lately, which is air drumming along to LED ZEPPELIN three times a day."

One thing that Grohl told The Pulse Of Radio he is not doing during his recovery is writing any new songs. "Gus, our tour manager, said, 'Did you want me to put your guitar in the room with you?'" he said. "I was like, 'Yeah, sure.' And I sat there staring at it like, that's the last thing I want to do right now. If I were to write a record right now, it would be a frustrated, depressing mess. No way! I want to write songs that make people boogie — I couldn't even walk! So no, I have not hit some creative stride."

Grohl broke the leg in a fall from a stage in Sweden, causing the band to cancel several European and U.K. shows.

The band has managed to not miss any dates on its current North American tour, with Grohl playing the gigs while seated on a large light-up throne.

Grohl said in a recent interview that he initially envisioned the throne flying above the crowd, saying: "At one point, that chair, we thought about putting these cables on that chair, and like flying around the stadium on one of those spider cam things. I was like, 'You know what, I already have one fucking broken leg. Maybe I'll just stay put.'"

The frontman also hinted at FOO FIGHTERS taking a break at the end of 2015, saying: "The hardest part about touring is being away from home. At this point, we have families, we have kids… This year is maybe one of the biggest years of touring we've ever done. Right now we go up to I think November, after that, we might take a little bit of a break, no pun intended."

The FOO FIGHTERS next play in Edmonton, Alberta, Canada on August 12.