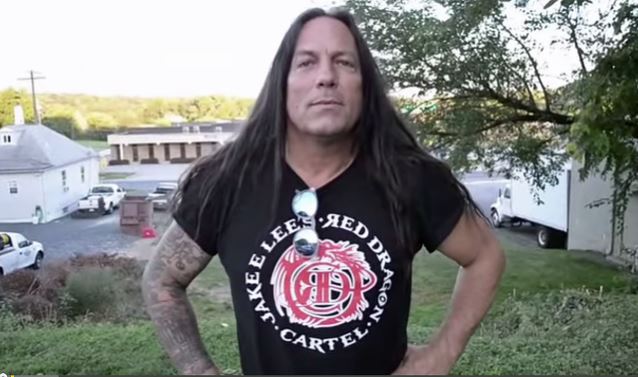 On how he got the singer gig in RED DRAGON CARTEL:

"Well, it's a long story. I thought I was retiring. I was in L.A. for thirty years, and I moved back to my hometown in Virginia. Anthony Esposito, the bass player for LYNCH MOB [and RED DRAGON CARTEL], called me up and said [RED DRAGON CARTEL] got rid of their singer and they needed somebody quick. So, I opened a skateboard shop in Alexandria, Virginia and closed it up and came out on tour, and I've been on tour since. So… I've known him since way before he was in LYNCH MOB back in the day."

On whether he is RED DRAGON CARTEL's permanent singer now:

"I don't know. We'll see. They say, 'Fifth time's the charm,' you know. I was really good friends with Ray Gillen [late BADLANDS and BLACK SABBATH singer]. I helped him… We used to write lyrics together a lot and stuff, and it's really just good to be able to walk in his footsteps now. It's very spiritual for me, and I'm having a great time doing it. My favorite stuff to sing is all the BADLANDS stuff. It's my gig. I love that stuff. Yeah, if it goes all well… you know."

On how he got to know Ray Gillen:

"I was one of the first guys he met when he moved out to L.A. from New York, and we just became hardcore friends. I used to work on Melrose, and I used to make guitar straps for John Sykes and all the heavy hitters back then. And Ray came in one day, and we just hit it off as singers together. We'd just write every day. He'd bring a notebook to work, and we'd sit and park and write stuff on my break and stuff, and that's how we became friends. Nd I would go to the rehearsals. And my band JONES STREET back then opened for them a bunch of times — BADLANDS — so we just always stayed tight."

On whether he has a handwritten letter from Ray Gillen that carries with him on the road:

"I do. It's… One day he came in and I wasn't there — I was on a lunch break — and he [wrote], 'Hey, Shawn. I don't know if you've checked out the new CD. If not, I'll bring one by for ya. I hope your singing's going great.' And it said, 'Ray Gillen.' And I found it in my storage literally a week — exactly a week — before these guys [RED DRAGON CARTEL] called me. And I just said, 'Ah, this is cool. I forgot I had this. I'm gonna bring it to the house.' And then Anthony called me [about the RED DRAGON CARTEL gig]. And I keep it with me on the road. So…. it's very cool."

"Jake is amazing. He's a quiet guy; he keeps to himself. [He's] an amazing person. The whole band's almost like a family. I just feel like… I've known Anthony forever. I didn't know the other guys, but it just all has meshed really well together. You know, 'cause you do have to spend 23 more hours off stage with these people. And that's the hardest thing to do — to be able to not get in anybody's face and everything. On a tour bus, it can get that way, but… we're having a great time.'

On whether he intentionally tries to look like Ray Gillen on stage:

"It's funny, 'cause I've been a blond almost my whole life, even though my hair is dark. And when I got divorced, I said, 'I'm gonna [make] a change.' That was, like, five years ago. I've always worn heavy shirts, like Ray did, and the jeans. That's just [my look]. I did not fathom at all — 'cause I'm five-seven; Ray was, like six-two — so… I did not fathom at all that I would be getting the 'He's channeling Ray.' 'Cause that's not it at all. Ray and I were great friends. I had blond hair the whole time. I just went black when I got divorced and said, 'I wanna do a new look.' And it's funny, because the new look… The black hair… I've got quarter Navajo in me, so I've got very dark hair. And once I got older, I just said, 'I don't wanna keep doing the blond thing. It's, like, a midlife crisis.' So I went black, and I've been getting great stuff ever since. So I should have done that a long time ago. But, yeah… [I'm] nowhere near trying to channel Ray whatsoever. I've been channeling him, but not on purpose. It just happened to fall that way. And the way that photographs have caught me is kind of cool that they caught me that way, but it wasn't intentional… I love Ray. He was one of my… He's still my favorite singer of all time. So to be able to… like I said, to be able to sing his music, as well as being with Jake, it's just great. I personally wish we could do all BADLANDS material, 'cause I can sing that all day long."