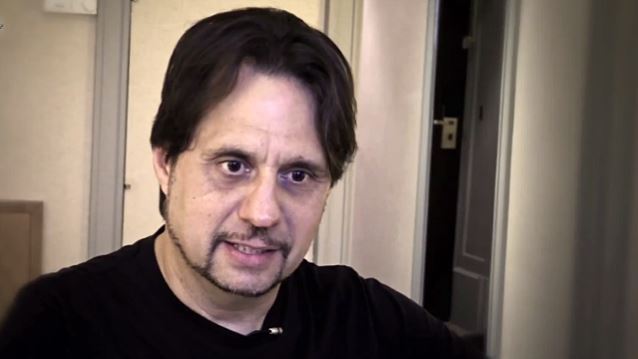 DAVE LOMBARDO: 'It's Been Amazing Being A Part Of Such An Amazing Band Like SLAYER'

Former SLAYER and current PHILM drummer Dave Lombardo was interviewed by Diane Farris on the December 18, 2014 edition of the WFMU program "Diane's Kamikaze Fun Machine". You can now listen to the chat in the YouTube clip below.

Asked what keeps him motivated to perform and record new music more than three decades into his career, Lombardo said: "The satisfaction of being on stage. I love being on stage. And I love being at the studio. I love being creative. I love listening. So all these factor into my motivation. Every day I wake up excited: 'What can I do? Let me wrap this up.' Of course, my day is also filled with other things. Interviews… You've gotta take care of business. There's other issues involved in daily life. But you try to do as much music as you can, and absorb as much as you can. That kind of keeps me motivated."

Regarding whether he "loves" his life, Lombardo said: "Yes, I do. It's been amazing being a part of such an amazing band like SLAYER. The fans that support me, and the musicians I've been able to collaborate with, I couldn't be any happier."