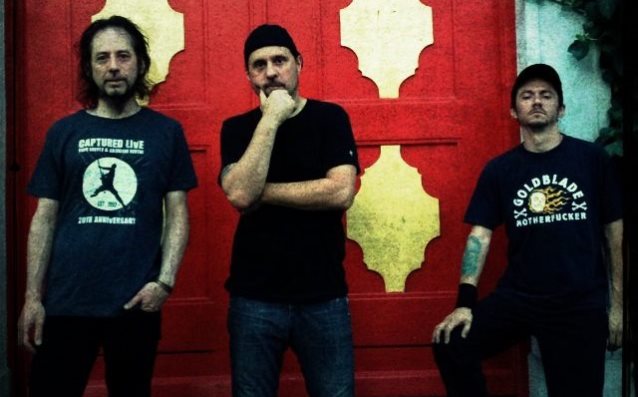 PHILM — the Los Angeles-based experimental post-hardcore triumvirate featuring drummer Dave Lombardo (SLAYER),guitarist/vocalist Gerry Nestler (CIVIL DEFIANCE),and bassist Pancho Tomaselli (WAR) — will perfom an amazing piece of music by Christopher Young called "Ghost Rider" with the Golden State Pops Orchestra at the haunted Warner Grand Theatre in Los Angeles on Saturday, October 19. It will be an evening of horror movie scores performed with the chills and intensity only a 75-piece orchestra can convey.

Due to his "crazy schedule," Tomaselli won't be able to perform with PHILM at tomorrow's gig. He will be replaced by "a great colleague," Dan Lutz.

PHILM released its debut album, "Harmonic", on May 15, 2012 via Ipecac Recordings.

"When people hear about my involvement in PHILM, they automatically assume that it will compare to SLAYER's sound," explained Lombardo. "They couldn't be more different. I have scaled down my drum set to a four-piece, reminiscent of the drummers from the late '60s that influenced me. Each song is unique in itself, I like to refer to it as 'rhythmic emotion.' It's almost like taking all the heavy songs of the '60s and bringing that era to a modern plateau, then blending them with the modern trance and psychedelic sounds of today."