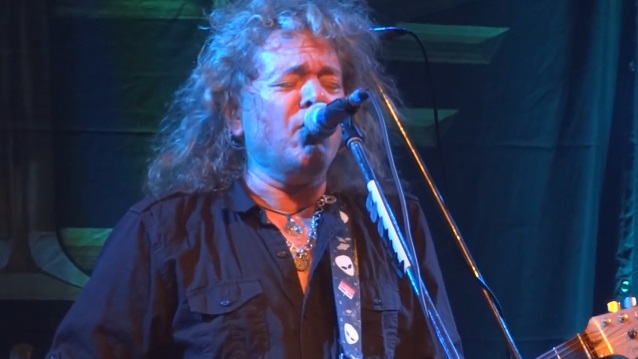 Dave Meniketti of Y&T spoke to Rock Radio NI about the band's 40th anniversary and the upcoming European tour. Without wanting to go into too much detail, he said that the band hoped to have a retrospective released by the end of 2014 as part of the group's celebration of its 40th anniversary. This would be followed, hopefully, by a new studio album during 2015. "We're also working on another thing that hopefully might get released before the end of the year," he explained. "I can't really say much more about it, but it's kinda going to be a celebration of our 40th year in business as well. A retrospective sort of thing. We're working on that currently."

Meniketti also told Rock Radio NI that the band would be trying to play one song from every album during the 40th-anniversary tour and that they were looking at the possibilities of including "This Time" in the setlist for the European tour that commences in October. Despite being a fan favorite, "This Time" has only been played live a handful of times.

When asked about his solo material, Meniketti confirmed that he hoped to get back into the studio to record another album and suggested that a European tour with the Meniketti band was a real possibility even before the release of a new CD.

The full interview is available to read or listen to at Rock Radio NI.

Y&T bassist Brad Lang originally joined the band in 2010 after founding bassist Phil Kennemore was diagnosed with lung cancer. Phil lost his fight with cancer in 2011 and Lang was asked to become an official member of Y&T.