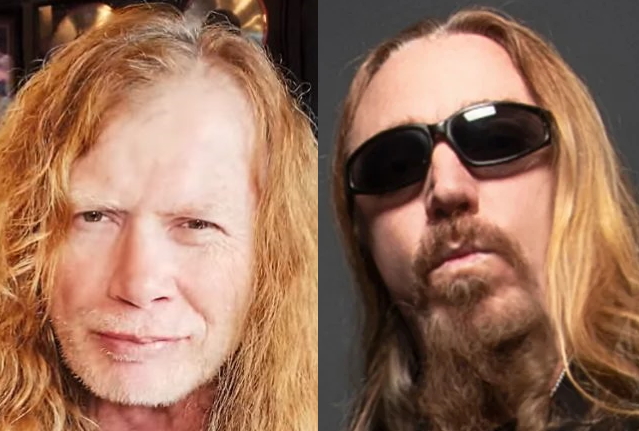 Dave Mustaine has confirmed that TESTAMENT bassist Steve DiGiorgio laid down the bass tracks on the new MEGADETH album, "The Sick, The Dying, And The Dead". Due on July 8, the follow-up to 2016's "Dystopia" features a cover of DEAD KENNEDYS' "Police Truck" and Sammy Hagar's "This Planet's On Fire", the latter of which includes vocals from Hagar himself.

The MEGADETH leader shared the news of DiGiorgio's involvement in the LP in an interview with Jose Mangin of SiriusXM Liquid Metal. He said (as transcribed by BLABBERMOUTH.NET): "We obviously had that weird little… Well, it wasn't little, but we had something happen that we needed to make a decision on, and it kind of set us back a little bit timing-wise, because we needed to recalibrate and find someone to perform the bass parts. And we found someone that I thought was the perfect fit for us while I was trying to decide what to do… And that was… Do you know who it was? Should I tell you? … It was Steve DiGiorgio. Nobody knows. You're the first person I told."

He continued: "It was a good choice. I didn't think about anybody else at the time. I was thinking about 'who's the hottest guy out there that can play these new songs?' Because [Mustaine's son] Justis told me one of the fastest songs we've ever written is on this record. And I don't care what anybody says — bass may be less strings than a guitar, but it's difficult to play. If you're like me, I have a real hard time playing the bass. I can play it, and I wrote the riff for 'Peace Sells… But Who's Buying?', for Pete's sake, but, you know, having to jam some of those parts that fast, it just kills your fingers.

"It took a little bit of some getting to know each other," Mustaine added. "We hung out and had some meals. And he and Dirk [Verbeuren, MEGADETH drummer] and Kiko [Loureiro, MEGADETH guitarist] and [engineer] Chris Rakestraw got along really well. We had talked about what he was doing with TESTAMENT and stuff like that, and we just all kind of realized that it was perfect the way that it was, and now's time for me to find someone who's gonna join MEGADETH, and I'm not gonna hurt another band in the process."

There has been speculation about DiGiorgio's involvement in the new MEGADETH LP since last July, based on a Cameo video Mustaine recorded in which he offered the first glimpse of the bassist that re-recorded David Ellefson's bass tracks on the much-anticipated MEGADETH effort. In the clip, the MEGADETH guitarist/vocalist could be seen walking around a studio where he showed Rakestraw sitting behind the studio console as well as the mystery bassist "hiding behind the chair on the floor." Although it was impossible to tell who the bassist was based on the video, the musician appeared to be using the same brand of Ibanez bass played by DiGiorgio.

Two months ago, Mustaine confirmed that James LoMenzo will play bass for MEGADETH when the band returns to the road in April for the second U.S. leg of "The Metal Tour Of The Year". Joining them will be co-headliners LAMB OF GOD along with special guests TRIVIUM and IN FLAMES.