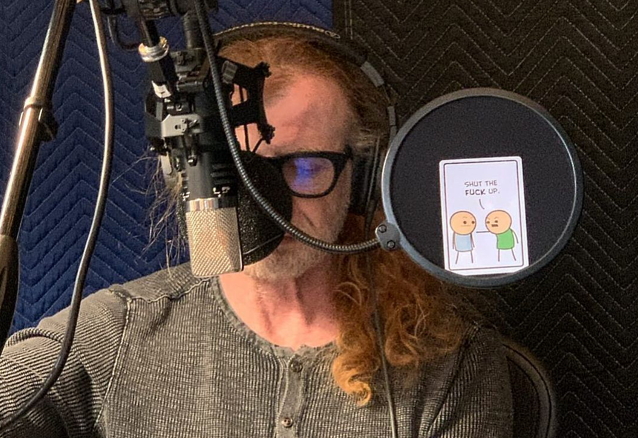 Dave Mustaine has returned to the studio to resume laying down vocals on the new MEGADETH album.

Earlier today, Dave's son Justis shared an Instagram photo of his father in a vocal booth, and he included the following message: "Vocals are being laid down and they sound KILLER! Quiet when recording please... #MEGADETH".

Last month, MEGADETH bassist David Ellefson told the "Rock 'N' Roll Icons With Bode James" podcast the recently announced working title for the band's upcoming album, "The Sick, The Dying And The Dead", will likely end up getting changed before the LP is released. "Like Dave said when he announced it, he goes, 'We usually end up changing the title four or five times before it [is released],'" he said. "We had a saying back in the old days: 'Nothing's final until it's on vinyl.' So everything can change. Probably short of the name of the band, everything can change. It's all just a work in progress, and I think that's the beauty of the creative world. People wanna know answers, like, 'What does it sound like? Does it sound like this album? Does it sound like that album?' And it's, like, 'Hey, man, I can't really tell you.' It's a work in progress until it's done. And then once it's done, you'll hear it, and then we'll all have a little talk about it."