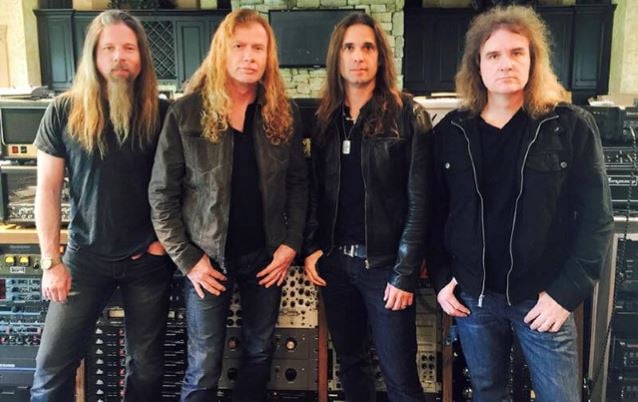 DAVE MUSTAINE On New MEGADETH Album: 'A Lot Of People Are Gonna Be Happy Because The Music Is Really Aggressive Again'

MEGADETH mainman Dave Mustaine spoke to Guitar World magazine about the band's long-awaited fifteenth album, which is currently being recorded at a Nashville studio for a late 2015 or early 2016 release. He said: "I think a lot of people are gonna be happy, because the music is really aggressive again." He continued: "There's nothing too out of the ordinary on the record. I think probably the most noticeable thing will be how my playing with the San Diego Symphony [in April 2014] affected some of my guitar work. Learning Vivaldi and Bach and all that, there's some stuff on the album where you can tell that made an impression on me. But there's nothing like 'Blackest Crow' [from 2013's 'Super Collider'], and, lyrically, nothing like songs that were on [1999's] 'Risk', talking about ecstasy or the breadline and stuff like that. These songs are definitely very dark. But is there anything unexpected? It depends what you expect. And anyway, to be predictably unpredictable… is still to be predictable."

Regarding the songwriting process for MEGADETH's new CD, Mustaine said: "I compiled stuff from things I laid down over a lot of years, on cassettes, microcassettes, even going back to floppy disc. I put all of it onto a hard drive, and it came out to more than 200 song ideas and riffs. Which is a pretty overwhelming number. We got that down to 13 songs."

The new MEGADETH album will mark the band's first to feature LAMB OF GOD drummer Chris Adler and Brazilian guitarist Kiko Loureiro, best known for his work with ANGRA. Mustaine has called Loureiro "best guitarist we've ever had," adding that he was a good fit personality wise. "[MEGADETH's last guitarist] Chris [Broderick] and I had a good chemistry, but we weren't really as close as I would have wanted us to be," Mustaine explained. "Kiko, I feel like I've known him for years."

Songtitles set to appear on MEGADETH's new album include "The Emperor Has No Clothes", "Tyranocide" and "Poisonous Shadows". The latter track features piano playing from Kiko as well as orchestration from famed Nashville arranger Ronn Huff, the father of former MEGADETH producer Dann Huff. Mustaine said: "It's a very dramatic kind of song." MEGADETH also recorded two cover versions during the sessions for the new CD: "Melt The Ice Away" by BUDGIE and "Foreign Policy" by FEAR.

Mustaine recently told Rolling Stone magazine about the sound of the new MEGADETH material: "Over the years we've always said, 'We're going back to our roots.' But the naysayers, they just want 'Rust In Peace' 20 times, which is never gonna happen. Because I've never written the same song twice. Unlike a lot of other rock and metal bands that, you know, they rely on a set formula, I try and make the songs all different. The funny thing, though, was that when [David] Ellefson was doing the bass tracks, I was telling him, 'This is the 'Tornado' ['Tornado Of Souls'] part,' 'This is the 'Bad Omen' part,' 'This is the 'Black Friday' part,' 'This is the 'Holy Wars' part.' Because a lot of the things were in that kind of vein. Now, is it going back in time? Hell, I don't know. But I like what I'm hearing."

Drummer Shawn Drover quit MEGADETH on November 25, 2014 "to pursue [his] own musical interests." Broderick announced his departure from the band a few hours later, saying that he was exiting the group "due to artistic and musical differences."