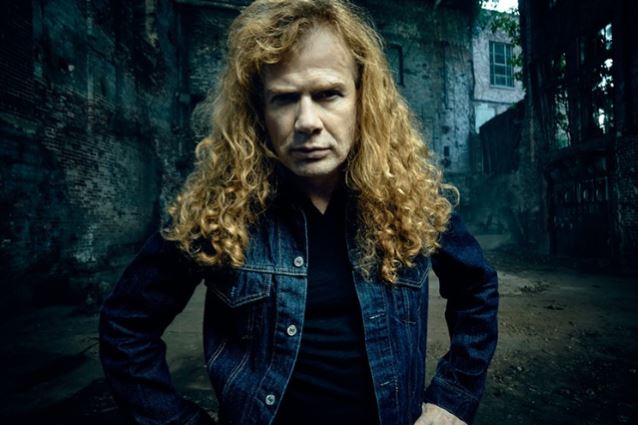 DAVE MUSTAINE Reveals His Favorite METALLICA Song That He Wrote

In a brand new interview with LA Weekly, MEGADETH mainman Dave Mustaine was asked how he spent the bus ride back from New York to California after being fired by METALLICA in 1983. He responded: "I was looking out the window. A lot. And it was excruciatingly painful... Because, remember, I was living with them, had no job, no income, no money. They'd put me on the bus with no money. So I had no food money. No nothing. And I got on the bus and off I went for a four-day journey with nothing to eat, nothing to drink. So that whole journey was a four-day fucking hell. Learning how to panhandle. How to get people to buy you booze so you could sleep through the night on the bus. [Laughs] When you go into the bus station and the bus would stop and wait for another driver and you just pray to God you don't sleep through the connection and shit like that. Because I'd never done anything like that before in my life. It's different if you know what to do and where to go. And if you have money. Money's the key to all your problems. But if you can't even make a phone call? It's pretty fucked up."

Mustaine was also asked which of the four songs he is credited with co-writing on METALLICA's 1983 debut album, "Kill 'Em All", was his favorite. He said: "My favorite? Hmmm. Interesting. Good question. You know, I like 'Phantom Lord' and 'Metal Militia' because they are very interesting songs. But I think if you were going to go for my favorite METALLICA song that I wrote, it would probably have to be ['Ride The Lightning' instrumental] 'The Call Of Ktulu'. It stands on itself. And when you have a song that can stand on itself without words, that's a big statement."

Mustaine, who was the original lead guitarist of METALLICA, was dismissed from the band by drummer Lars Ulrich in 1983. He was replaced by Kirk Hammett and went on to form MEGADETH and achieve worldwide success on his own.

Mustaine feuded with the members of METALLICA for more than two decades before finally patching things up over the last few years. He has jammed with his ex-bandmates on several occasions during "Big Four" shows and at METALLICA's 30th anniversary concerts in 2011.

The MEGADETH leader apologized to Hetfield in May 2012 for publicly discussing the fact that Dave wanted to assemble a "supergroup" combining Mustaine and MEGADETH bassist David Ellefson with Hetfield and Ulrich.

Hetfield laughed off talk of a possible collaboration between members of his band and members of MEGADETH in an interview, calling it "crazy" talk on the part of Mustaine.

Hetfield told So What!, METALLICA's fan club magazine, "I see [Mustaine] healthier now. I see him as less of a bitter guy. But I do see a lot of stuff in the press with him talking about jamming with us and making an album. All this other crazy stuff. I read it and say to myself, 'Hold on. This is the Dave that we kind of wanted to forget about. You know, the big-mouth that wants to just go-go-go."

Hetfield added, "But there is an authenticity about him when he speaks. He doesn't think too much before he does. He just goes off the cuff. Plus, when he says stuff like that, it's well-intended."

Mustaine joined his former METALLICA bandmates on stage on December 10, 2011 for the fourth and final intimate show at the Fillmore in San Francisco as part of the group's week-long celebration of its 30th anniversary as a band for fan club members only.