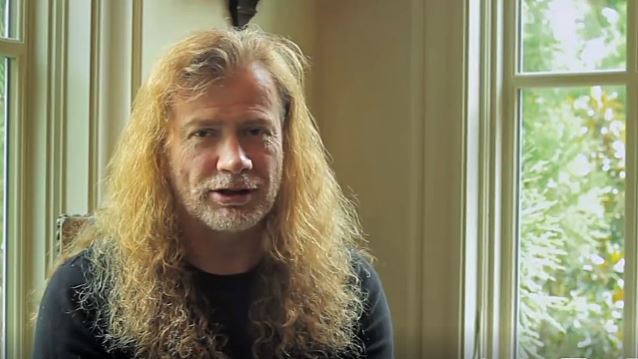 MEGADETH mainman Dave Mustaine has revealed that a previously mooted Nick Menza tribute concert featuring past and present members of MEGADETH is now unlikely to happen.

Less than 24 hours after the former MEGADETH drummer died on May 21, Mustaine said that he had already started talks to perform a benefit concert that would hopefully include as many ex-members of MEGADETH as they can get. But that plan now appears to have come to a halt, as Mustaine told EonMusic on Monday (June 13) at the Metal Hammer Golden Gods in London, England. He said: "There's some stuff going on right now where [Nick's] family is doing a GoFundMe page, and I'm not involved in that. If they need our help, they know where we're at. We love them and want the best for them, so we'll find out."

He continued: "For now, I think that if anybody wants to get involved with [supporting] Nick [by donating money], the GoFundMe page [is the best place to do so]. I would rather that if anybody's going to support what we're going to do, our involvement is to help Nick's legacy for his children. He's got artwork, he's got a lot of music that he's written outside of MEGADETH, and if people really love Nick and they really want to support him, look at his artwork, focus on the music that he did, MEGADETH or otherwise."

Mustaine also said that he "had no idea how much [he] loved" Nick until he broke down following the dedication of a song to his former bandmate at the Rock 'N Derby festival on May 22. Dave said: "Yeah, [my emotional reaction] came out of nowhere. I didn't know what it was, because it was very [well known] how much Nick did not like me, in the things that he was saying [in the press]. And I was not going to retaliate because I loved him, and I think that was evident when we dedicated the song to him. I couldn't finish it, and I usually don't let things stop me from doing by job, but I was overwhelmed with emotion. We've lost a lot of very valuable members of the metal community this year and last year."

Mustaine went on to talk about Menza's talents as a musician, explaining that he was unaware of how revered Nick was until after his passing. Dave told EonMusic: "The contribution [Nick] made to metal music, you can't really quantify it, because MEGADETH influenced so many different players in so many different genres. I know only of the guitar players that have been influenced, but the drummers that have been influenced by Nick, until his passing, I had no idea."

He added: "You know, I've always loved [Nick's] playing and thought he was great, so he's terribly, terribly missed. And, like I said, I had no idea how much I really loved him until I couldn't finish the song."