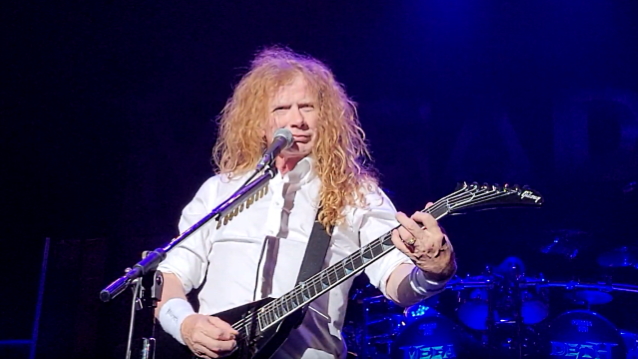 Dave Mustaine says that MEGADETH's sixteenth studio album, "The Sick, The Dying And The Dead", will finally arrive this summer.

The MEGADETH leader, who turned 60 in September, touched upon a possible release date for the band's new record while promoting the next U.S. leg of MEGADETH's "The Metal Tour Of The Year" with LAMB OF GOD, which will kick off on April 9 in Las Vegas, Nevada and run through May 15 in Allentown, Pennsylvania.

Asked by Forbes if fans can expect this second leg of the tour to be the first tour in support of the new MEGADETH LP, Dave said: "No. This is wrapping up the remainder of last year, but I know that our actual official record release date had gotten moved back again with all of the distribution stuff, and all of these issues with getting product from one place to the next with record plants making vinyl. We're not reliant on vinyl so much but just the whole process has been delayed, so it's just gotten moved back again. We're going to be doing, I believe at the time I'm not sure, but I believe at the time when the record comes out this summer we'll be on a tour that we're going to be announcing, but I can't really get into that right now because I don't know for sure the dates."

Last month, Mustaine debuted a snippet of the song "Life In Hell" from "The Sick, The Dying And The Dead" while filming a video message on Cameo, which lets users hire celebrities to record brief, personalized video messages about virtually any topic. Earlier in December, Mustaine revealed that the follow-up to 2016's "Dystopia" had been mastered and was "super close" to being released.

In a recent interview with American Songwriter magazine, Mustaine said "The Sick, The Dying And The Dead" title track is about the plague, but not solely centered around the current pandemic. A broader, more historical scope of the diseases that have plagued humankind throughout time, "The Sick The Dying And The Dead" covers the current virus, swine flu, and other epidemics from centuries past.

"The song itself was a historical journey of how the plague started and where it went, starting with rats on ships carrying the disease, coming ashore in Sicily," Mustaine said.

According to Mustaine, the music for "The Sick, The Dying And The Dead" was assembled from riffs and music he has had archived for years, some as far back as his teens. "A lot of the riffs have been saved over time," he said. "A brand new song can be made up of something I wrote when I was 15 or 55. If It's a good riff, I'll save it."

Mustaine added that guitarist Kiko Loureiro and drummer Dirk Verbeuren were both involved in piecing together the songs on the album, which was recorded mostly in Nashville, with Loureiro working on his parts from his home in Finland.

Mustaine has yet to reveal who played bass on the new MEGADETH album after David Ellefson's tracks were removed from the LP following his dismissal from the band last May.

For the first leg of "The Metal Tour Of The Year", which took place in August and September, MEGADETH was rejoined by bassist James LoMenzo for the first time in nearly 12 years.