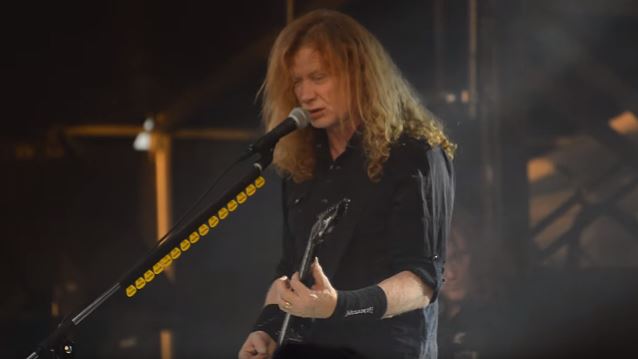 Dave Mustaine has told The Register-Guard in a new interview that MEGADETH fulfilled part of its goal to return to the group's thrashier early sound on its latest album, "Dystopia".

"Well, the beats per minute aren't quite as high as they used to be in some of the songs," he said. "I think the guitar playing has gotten a little bit more explorative. When you're doing a riff in a very small area of the guitar neck, you can play that much faster. If the riff gets more complicated, for the sake of the melody becoming more expansive and enjoyable, you have to cover more neck area sometimes. It's a little bit harder to get that mind-blowing speed."

He continued: "There are a lot of jaunty tempos on this record. Do I think it ['Dystopia'] is [1985's] 'Killing Is My Business?' No. But it definitely is the record that fits in the timeline before [1994's] 'Youthanasia' somewhere."

In a November 2015 interview with Full Metal Jackie, Mustaine was asked about his previous comment that he wanted to return to MEGADETH's roots and make a trash album. "Well, just because you say you wanna do something like that doesn't necessarily mean it's gonna happen," he laughed before adding. You know, there's been a lot of times I've said that over the past, and, for whatever reason it just didn't materialize. Sometimes it had to do with me, sometimes it had to do with others. But I think that, for the first time now, we've actually really embraced that part of us that made us a thrashier band. A lot of it was how we were feeling and the way that we were looking at our lives at the time and just being… You know, instead of being disappointed… There's a difference between having a bad situation and being depressed versus having a bad situation and being pissed and doing something about it."

Mustaine also attributed the more aggressive sound on "Dystopia" to the fact that MEGADETH "went back to making music for ourselves." He explained to AndrewHaug.com: "We've been saying that so much, and then you get into the studio and people start saying, 'Well, you know, this sounds like it could be a radio song. Let's put this one out.' And for this, we have a new management team, A&R, label… everything's new. So it's good for us, because that new blood… everybody who's working on the project are metal fans; they're not people who are in the music business and this is one of their accounts. [Adopts southern drawl] 'What's MEGADETH? I don't know what those guys are about.'"