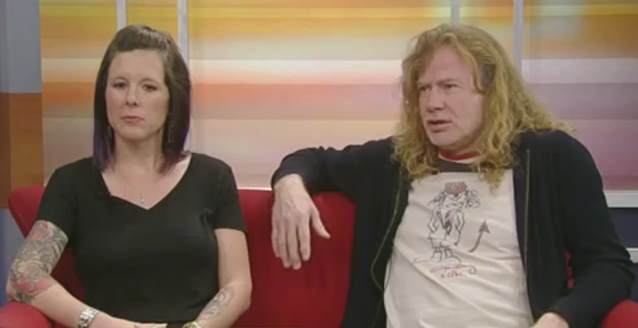 Sarah Churman, who was born deaf, became an Internet sensation when her husband posted a YouTube video of her hearing for the first time at 29 years of age. Now she is a huge MEGADETH fan, and the band's frontman, Dave Mustaine, flew her to Las Vegas to see MEGADETH perform this past Thursday (April 17).

During a joint interview with Sarah ahead of the Las Vegas concert, Mustaine spoke to KTNV-TV about how the he and the rest of MEGADETH found out about Sarah's incredible journey and their decision to make it possible for her to experience her first rock show (see video below).

"It was such a heart-touching story to watch her… I consider myself to be pretty rugged, but I got a little teary eyed when I watched her be able to experience what we all take for granted," Mustaine said. "And then somebody had said, 'You know, she actually likes your music.' And it was just great. You never know what you're gonna hear nowadays on the 'Net or what you're gonna see."

He added: "I can't really remember how her video came across my computer, but like I said, when I saw it, I was instantly compelled, and when we found out that she was a fan, it was, like, this is a no-brainer. We wanna meet and just say how fortunate we are to be a part of her life and this new phase."

Unlike a lot of deaf people, Churman's speech is nearly impeccable despite never clearly hearing herself while growing up. It's something she attributes to deaf school and her love for the English language and grammar. In addition, she grew up with music her whole life because her dad was a songwriter and played in a band.

"Even though I couldn't understand lyrics or different instruments, there was always a way to enjoy it," Churman told the Las Vegas Review-Journal. "In my world, that was turning it up as loud as possible and feeling the vibrations."

While in Las Vegas, Sarah was also going to interview Mustaine for an undisclosed MEGADETH project.

Churman's book, released by Indigo River Publishing, is called "Powered On: The Sounds I Choose To Hear & The Noise I Don't", and in it she details her life's journey and offers unique insights from the perspective of a woman who has experienced both sides of a disability.

Churman is still adjusting to her new sensory experience, and she claims to have felt a variety of "mixed emotions" during the process. Many sounds are still jarring for her, but others bring her "so much joy," she says, most notably the voices of her husband and two daughters and, not surprisingly, music: "I get the full spectrum of it now, and it's amazing."