DAVE MUSTAINE Talks MEGADETH Beer: 'I Wanted Something That Had A Really Great Finish On Your Tongue'

MEGADETH mainman Dave Mustaine and Unibroue brewmaster Jerry Vietz were recently interviewed by The Gauntlet about their collaborative beer À Tout Le Monde, which officially launched last month in the U.S. and Quebec, Canada. Named À Tout Le Monde as a nod to one of the band's songs and one of their biggest hits in Quebec, this beer recalls the consonance of Unibroue's flagship beer, La Fin du Monde.

Describing the flavor of À Tout Le Monde, Mustaine said (hear audio below): "Part of the reason that I was able to explain to Jerry what I liked and what I didn't like was because I just used really simple terms. I don't like the metallic taste that some beers have. I don't like how there's a bitter aftertaste. I don't like when you drink it, how it feels heavy in your stomach or how when you've had a glass of beer, how you start to feel inebriated already. I wanted to have something that was really refreshing, and I wanted something that was crisp that had a really great finish on your tongue and that you would have a sip and that it would compel you to have another sip after that, something that didn't have a skunky taste to it, like some of the green beers that come in bottles."

He continued: "In my rider for our concerts, we had two beers that we would get. There's another beer that was very watery-tasting. I wanted it to have some character to it, have some spice to it — just something that, when you tasted it that it wasn't overbearing.

"Being of German descent, my mom drank a lot of beer, so consequently I was exposed to a lot of beer drinking. And I wanted something that, if you were having a meal, you can have a beer, and the beer didn't overpower the flavor of what you were eating."

During a recent appearance on "Trunk Nation", Eddie Trunk's new show on SiriusXM channel Volume (106),Mustaine talked about how the idea for the beer came about. He said: "We started last summer when we headlined the [Festival D'été De] Québec festival [in front of] eighty thousand people. We had pulled up in the middle of the day and went to the hotel with this guy named Jerry Vietz from Unibroue. And we both had a lot of stuff in common and we hit it off right away. I was kind of sampling some of the different beverages that he had. And [I told him], 'I like this. I like this about this one. I like this about that one.' And we made a second round, brought the liquid down to Nashville and tried it again. And I said, 'Okay, so it's getting really close. I like this about this, and I like this about that.' And then I got to taste the final product for the first time on [October 21] in Orlando [Florida]. And it's just been a huge smash. I heard yesterday they sold 240 cases in one day in Tampa. That's just one city in the nation, and they distribute to five continents. I can see now why IRON MAIDEN did it."

Mustaine added that he put a lot of care into making sure that the beer satisfied his personal taste with the hopes that other people would feel the same.

"It's funny, because I've spoken with a couple of beer magazines now — I didn't know they had beer magazines, but evidently they do — and they said, 'Have you tried the IRON MAIDEN beer?' 'Oh, yeah, of course.' 'Have you tried the AC/DC beer?' 'No. How is it?' 'Oh, it's terrible.' 'Have you tried the MOTÖRHEAD beer?' 'No. How is it?' 'Well, it's okay.' And they told me that MASTODON has a beer, I think, and then NEW ORDER has a beer too," Mustaine said. "And it's, like, okay, well, maybe these dudes got into it just to kind of slap their name on a can of beer or something like that. I did this because when we did the wine… In April of 2014, we made wine [to coincide with Mustaine's performance with the San Diego] Symphony, so that there was something really cool that would be like a social lubricant with everybody, but also be like an adhesive where everybody would come together with the two worlds colliding."

Posted by Megadeth on Thursday, November 3, 2016 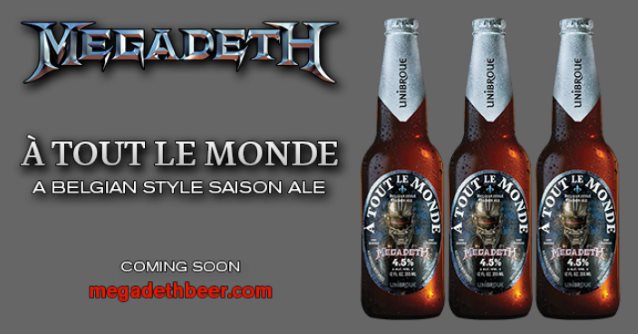