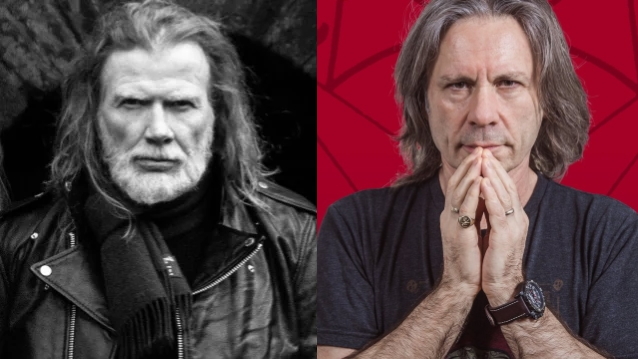 MEGADETH's Dave Mustaine has confirmed that he reached out to Bruce Dickinson after he was diagnosed with throat cancer nearly a year and a half ago. The IRON MAIDEN frontman himself had surgery to remove a cancerous lump on his throat back in 2015. He has since recovered and continues to sing with the band, although he said that his vocal cords were "cooked" due to the required cancer treatments.

Asked in a new interview with Forbes if he called Dickinson for advice on how to deal with cancer, Mustaine said: "After I was diagnosed with it, I thought, 'I want to call Bruce,' it's not like I have a whole Rolodex of rock friends that sing heavy metal music that have throat cancer [laughs], so my choices were limited.

"I was pretty proud of Bruce after speaking with him," he continued. "Although we're not super close, I consider him to be someone I look up to. He basically told me the same thing I just told you: surround yourself with good, upbeat, positive people, places and things and try not to cause any unnecessary stress on yourself.

"When you're a frontman in one of the biggest bands in the galaxy, you don't really have to tolerate the frontman of the other bands very much, but he's always been super kind to me and very, I don't want to say 'gentlemanly,' because I don't want anyone to think that he's not a bad motherfucker!"

Dave previously revealed he had spoken with Dickinson in a November 2019 interview with Rolling Stone. He said at the time: "[Bruce told me] when he had his disease [a cancerous tumor on the back of his tongue], after his treatment was done, he was told that he needed between three to six months of rest. He said to me that he didn’t listen and had a little bit of trouble, so then he realized he needed to listen. So he did and his voice came back stronger than ever. I care so much about Bruce; he was another really supportive brother to me during this whole thing. He explained to me how he did it, and it really helped. I'm just looking forward to if there's ever a circumstance where this happens to another one of my peers, I can return the favor and help them. It's a tricky disease, but they've got doctors all over the place that are figuring this shit out."

Mustaine was told he was cancer-free last October, five months after receiving his throat cancer diagnosis.

The 58-year-old MEGADETH guitarist/vocalist revealed his throat cancer diagnosis in June 2019 on social media, saying the doctors had given him a 90 percent chance of beating the illness. He later said that he underwent 51 radiation treatments and nine chemo treatments before being declared cancer-free.

Mustaine's new book, "Rust In Peace: The Inside Story Of The Megadeth Masterpiece", was released on September 8 via Hachette Books. It details the making of MEGADETH's iconic record "Rust In Peace".