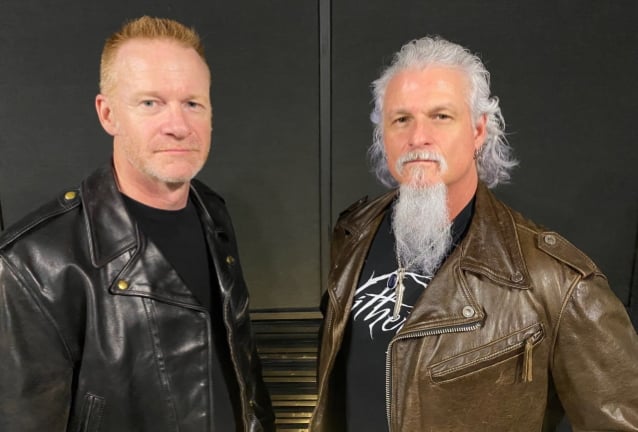 ICED EARTH's JON SCHAFFER: MATT BARLOW Is Not Coming Back To The Band

After Schaffer and Barlow announced last month that they were reuniting as the SCHAFFER/BARLOW PROJECT, some ICED EARTH fans assumed that the renewed collaboration between the two musicians would lead to Matt being reinstated as ICED EARTH's lead singer, a position he hasn't held in nearly a decade. However, that doesn't appear to be the case, as Schaffer made clear in a Facebook Live chat on Tuesday (September 8).

Addressing the rumors directly, Schaffer said (see video below): "There's a lot of theories about whether Matt's coming back to the band, and he's not. Stu [Block] is the singer of ICED EARTH — period. That doesn't need to be discussed or theorized.

"The SCHAFFER/BARLOW PROJECT is not some signal that Matt's coming to the band," he continued. "Matt has a long history with the band and a very important history with the band. And that doesn't that maybe some day he won't make a guest appearance on a record; that would be awesome. I have really cool ideas.

"Stu Block is the lead singer of ICED EARTH, and he's absolutely one of the dearest people in my life," Jon reiterated. "So nobody's getting pushed out. None of that's happening."

Block (formerly of INTO ETERNITY) made his live debut with ICED EARTH in November 2011.

SCHAFFER/BARLOW PROJECT will release its debut EP, "Winter Nights", in November. The effort sees the two musicians putting their unique spin on five Christmas classics and two ICED EARTH songs. The EP features holiday classics like "Silent Night" and "Little Drummer Boy", as well as new interpretations of the ICED EARTH tracks "Watching Over Me" and "I Died For You".