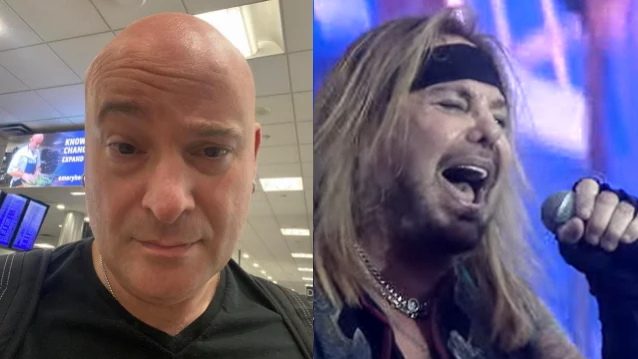 DISTURBED's David Draiman has praised Vince Neil for his performances so far on MÖTLEY CRÜE's stadium tour, saying the singer is "sounding good" and "looking healthy".

Neil has been receiving mixed reviews for his vocal performances on "The Stadium Tour", with one reviewer saying that he is sounding "better than he did" in 2015, and another suggesting that Neil's "vocal shortcomings" are being "largely covered by red and white lights and sheer adrenaline." A third reviewer concurred, saying that CRÜE's concerts on "The Stadium Tour" are "so loud [that] it could be hard to hear" Neil over the music, adding that "perhaps that's by design."

One musician who agreed with Draiman was RATT singer Stephen Pearcy , who responded to David's tweet. "Agree, brother @thevinceneil @MotleyCrue still kickin' ass!" he wrote. "Still doing what we've always done (we're gladiators, what's works for us might not seem right for everyone) who else has been singing, screamin, yellin at people for 35 plus yrs. Not an easy job, its a dirty job."

A short time later, Draiman wrote in response to Pearcy: "If it were easy…everyone would do it (maybe not lol). Gotta keep that torch raised high".

Earlier this month, Draiman defended Neil after several video clips of MÖTLEY CRÜE's July 5 concert in St. Louis, Missouri showed the onstage teleprompter which the singer is apparently relying on to get him through each show. On July 6, Draiman took to his Twitter to write: "All you parasitic vultures pretending to be journalists who broke the 'big story' that Vince Neil/ @MotleyCrue uses a teleprompter onstage should really find a new line of work. SO FUCKING WHAT? Most artists with extensive catalogs do. Leave the guy alone FFS."

Back in 2016, Neil was asked in an interview with Palm Springs Life how he "still hits those higher registers" after all these years and what he does to keep his voice in shape. He responded: "I have an old road singer/saloon singer mentality. I love performing; that's what I do. I'm thrilled to be there, and I've done it so much. Younger, up-and-coming singers will say, 'Hey, Mr. Neil, what do you do?' And I say, 'Don't do what I do, for God's sake!' I go in a bathroom, and [yells], 'Hey! Heyyyyy!!!' I scream. Even the guys in [my solo] band go, 'What the fuck?' I do the worst thing you probably should, but it works for me. Everybody has a thing that works for them — but what I do for myself, I wouldn't suggest."

He continued: "It's been bulletproof over the years. Everybody gets sick sometimes and gets laryngitis, but I've been pretty lucky, especially in that higher-register stuff. And we don't back away from it. It's exactly where all the original tunings were. I understand a lot of people don't want to do that, but if someone calls something out, I go, Fuck it! Let's do it!'"

If it were easy…everyone would do it (maybe not lol).

Hope you and yours are well.