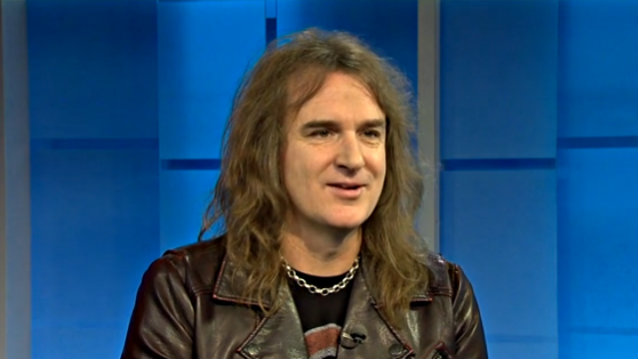 DAVID ELLEFSON: 50% Of MEGADETH's Fan Base Would Love To Just Hit Repeat On 'Rust In Peace'

Joe Daly of The Weeklings recently conducted an interview with MEGADETH bassist David Ellefson. A couple of excerpts from the chat follow below.

The Weeklings: Dave's [Mustaine, MEGADETH mainman] book didn't really feel like it pulled a lot of punches. Many of his observations, including those concerning you, were quite candid, especially in regard to some of your struggles. Did his book inform the way you approached your story [in your autobiography, "My Life With Deth"] at all?

Ellefson: Dave and I are two very different people, and it's interesting that two guys in the same band named "Dave" could be so different. [laughs] Yet you have the same aspirations, and I think that's kind of the beauty of the story of Dave and me — we come from very different backgrounds, very different upbringings; we met at the epicenter of heavy metal in Hollywood in 1983, both with the aspirations of starting the most kick-ass band on the planet, and the two different viewpoints that we both have, by and large, is the chemistry of MEGADETH. I've done things on my own and they're not MEGADETH and Dave did MEGADETH without me for a few years, while there was the thrust of MEGADETH behind that, I think we all agree that when harmony came back between me and Dave and we both got back on stage together, everybody relaxed and it was kind of like, "Yeah, this is the MEGADETH that we've been used to seeing and hearing all these years," you know?

The Weeklings: Was it difficult mining the memory banks for the details within these stories?

Ellefson: When you're going through drug and alcohol recovery, these revelations happen and the lights come on… those happened for me at a very young age — at age 25 — I was still a very young man, not yet fully matured as a man. I'm glad I got sober at such a young age because I was at least given the opportunity to have clarity because when you're in the haze of drugs and alcohol and you're young and not fully matured, you don't have the gift of clarity. I saw so many people wake up — if they even woke up at all — in the later years of their life and realize that they'd missed the best years of their life and the best years of their career. I think that, for me, that clarity that came at age 25 when I got clean allowed me, I'd like to think, to take a more mature look at my life as I wrote in the pages of my book.

The Weeklings: MEGADETH also released a new album this year — "Super Collider". Where do you see this fitting in with your overall catalog?

Ellefson: New records are always interesting for MEGADETH because probably 50% of the fan base would love to just hit repeat on "Rust In Peace" — that's the soundtrack to their lives and if that's all we ever did, they could die and go to heaven, you know? But there's the other half of the fan base who came into the MEGADETH fold at various points along the way, maybe with "Countdown To Extinction", which was a more song-oriented and melodic record. Same with "Youthanasia", same with "Cryptic Writings". Some of our younger fans got introduced to MEGADETH when the thrash metal movement became really popular again in the mid-00s, led largely by the next wave of bands like KILLSWITCH ENGAGE, LAMB OF GOD and those kind of bands. But making a MEGADETH record now, we realize we're not a one-trick pony and while we can write "Holy Wars" or "Hangar 18", there's also a tendency to write "Symphony Of Destruction" and those kinds of songs. So a new MEGADETH album like "Super Collider" is going to have a title track like "Super Collider", which is a very melodic, very mainstream kind of rock song, yet also have things like "Built For War", "Kingmaker" and other songs that have very much the traditional MEGADETH thrash elements in them.

The Weeklings: If you could script the next ten for MEGADETH, how would they look?

Ellefson: To some degree I don't think they'd look too different from what we're doing right now. I think that for us, more than anything, going into new countries to play our songs is one of the greatest thrills, because we've been to a lot of places and it's easy to go, "Yeah, been there, done that," but when you open the door to a new country, it's such a thrill to know that there's still uncharted territory here on Planet Earth, where they are so thrilled and so grateful that you made the effort to get to their country and play, and that, to me, is the real connection of heavy metal.

Read the entire interview at The Weeklings.