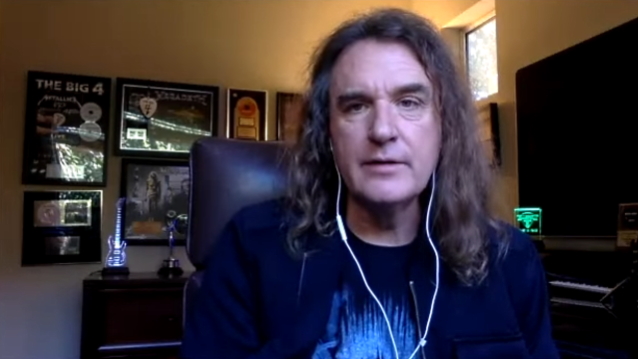 In a new interview with the "Fantasm" podcast, David Ellefson said that he believes there will be another installment of the MEGADETH-branded Megacruise. "All the cruises, of course, have now been pushed back to next year," he said (hear audio below). "But, yeah, it was successful, and the fans loved it — they just had the time of their life; they thought it was just such a great experience. So, yeah, I would say there's one in the future here."

The inaugural Megacruise departed from Los Angeles on October 13, 2019 on a round-trip voyage to San Diego and Ensenada, Mexico and returned on October 18, 2019. The at-sea music experience featured performances from ANTHRAX, LAMB OF GOD, SUICIDAL TENDENCIES, QUEENSRŸCHE, DEATH ANGEL, TESTAMENT, DRAGONFORCE, OVERKILL and CORROSION OF CONFORMITY, among others.

Promoter Larry Morand — whose company On The Blue also produces the annual Monsters Of Rock, Cruise To The Edge and On The Blue music cruises — told Classic Rock the idea for the Megacruise originated several years ago during a phone call with the band's booking agent. "[He] said, 'Hey, I just picked up MEGADETH. They were going to do this other cruise [2014's Motörboat] and it didn't happen, but they'd really like to do one,'" Morand said. "I said, 'Would they like to host one?'... At that point, [we had] a bunch of different calls and meetings. It really flourished, and we started to build a marquee around it."

From there, Morand says he curated a list of potential performers for Dave Mustaine's approval. "Dave picked through it," Morand explained. "He wanted to be really hands-on... I thought it would be great to have something that shows the legacy of who they are. He totally agreed, so as we went through it, it was painstaking. It's funny what was curated and what [took] a bit of work."