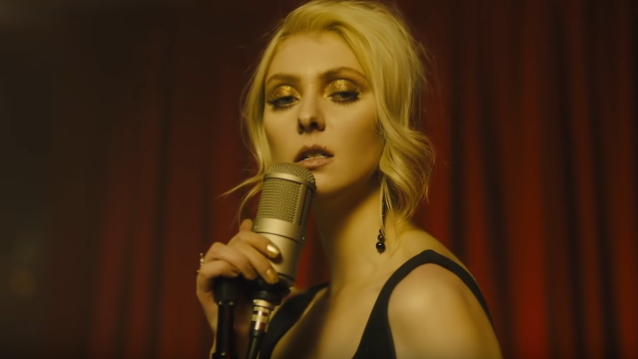 THE PRETTY RECKLESS's TAYLOR MOMSEN: 'Rock Will Never Die; I Don't Think It Can'

THE PRETTY RECKLESS singer Taylor Momsen recently spoke with Kerrang! Radio's Sophie K about recording the band's new album "Death By Rock And Roll". They discussed the troubling times that inspired the LP, as well as the joy that rock music can bring, the state of rock music right now, their hope that Download festival 2021 will go ahead, and Taylor's long-term plan to move to the U.K. (and realistic expectations about the food). You can now watch the chat below.

Speaking about her love of rock and roll music in general, Taylor said: "First of all, rock and roll is just awesome, and if you disagree with me, I think you're wrong. Because rock and roll is so much more than a genre. And I think that everything wants to define, especially nowadays, with the way that music is distributed and listened to and heard…

"Rock and roll has always been there — it's just always been on the outskirts of society; it's always been there for the underdogs; it's something you had to search for," she continued. "And it has its moments in the sun where it takes over. But pop's the mainstream thing, and that's fine. Because rock and roll is so much more important than that. It has so many layers to it; it has so much depth. It's soul food. It's something that you need, at least for me. I need it the same way I need food and water and oxygen — I need it to survive. And it surpasses just a genre, especially now that there's active rock and modern rock and hard rock… I don't know. How many versions of rock can you name? To me, it's all rock and roll, where it really just encompasses everything, 'cause rock and roll is one of the original art forms; it stems from the blues. So it's blues and it's jazz and it's funk and it's pop and it's hip-hop — dare I say it — and it's country and folk. It's all of those things put together in one. And as a writer and as a musician, it's just the most freeing thing in the world to play rock and roll music, because you don't have to put any limitations on yourself; you can go in any direction you want to. And that's what's so amazing about being an artist — is being able to express yourself in any way that you see fit. And we get to crank electric guitars, which, there's nothing cooler than that. And I stand by that."

"Death By Rock And Roll" was released today (Friday, February 12) via Fearless Records in the U.S. and Century Media Records in the rest of the world. It is THE PRETTY RECKLESS's first LP to be made without longtime producer Kato Khandwala, who died in April 2018 from injuries sustained in a motorcycle accident.

"Death By Rock And Roll" features guest appearances by Tom Morello of RAGE AGAINST THE MACHINE, and Kim Thayil and Matt Cameron of SOUNDGARDEN.