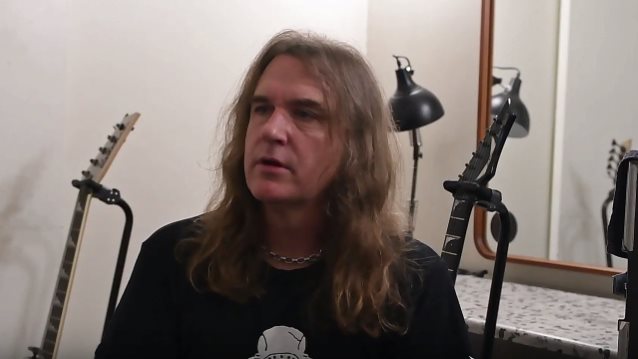 On August 2, Denmark's HeavyMetal.dk conducted an interview with MEGADETH bassist David Ellefson. You can watch the full chat below. A couple of excerpts follow (transcribed by BLABBERMOUTH.NET).

On the "essence" of MEGADETH:

David: "I'd say MEGADETH is definitely a vision that Dave [Mustaine, MEGADETH mainman] had, for sure. And it's interesting how it came together, because when he and I met, he had just been out of METALLICA about six weeks and I think he was kind trying to figure out what the next step is. And I think in any band, you need partners, you need believers, you need people who are willing to buy the dream, and I was certainly that guy from the beginning. So I think MEGADETH is certainly the charisma of Dave's riffs, his singing… We were talking the other day… There's great singers — vocalists — and then there's guys who just get on the mic with conviction and scare people, and that's what Dave does. He's just [adopts Mustaine's vocal style] 'Hello me, meet the real me' [from the MEGADETH song 'Sweating Bullets']. It's believable. So the vocal prowess isn't as important as the conviction, and I learned that as soon as I met Dave — that he had real conviction. And I think probably I'm the yin to the yang — I'm the balance to that. And every band needs that too — you have to have balance, because I think that's what brings harmony to MEGADETH. And now certainly Kiko [Loureiro, guitar] coming in has created a real team. I remember when we finished [MEGADETH's latest album] 'Dystopia', Dave goes, 'God, I'm so glad Kiko's here. I feel like I have a real guitar partner.' I grew up with twin guitar — THIN LIZZY, JUDAS PRIEST, IRON MAIDEN, KISS — and I feel like MEGADETH has that real partnership now. With [current MEGADETH drummer] Dirk [Verbeuren], he really understands from a player, from a student and from a fan, he understands [former MEGADETH drummer] Gar [Samuelson] — the way his fabric of MEGADETH in those days — Chuck [Behler], Nick [Menza], Jimmy DeGrasso [who was with us] just a short time, and then even the stuff Shawn Drover played on. So I think we now areMEGADETH."

On why he thinks "Dystopia" has been so well-received:

David: "We got caught — and we admit it — in this thing of every time we would write a song or riff, we got to this place where, 'Okay, here's the chorus.' We never used to write songs like that. 'In My Darkest Hour' is a perfect example — kind of this constant compiling of riffs, and then there'd be like, 'Stop. Let's change tempos and go off in this new direction.' That was the heart of MEGADETH, and that kind of prevents you from being really accepted into the mainstream. By the time we got into certainly 'Symphony Of Destruction' and the 'Countdown [To Extinction]' record, we had discovered... and a lot of it was that lineup. Marty [Friedman] added this great melodic component; Nick had a real charisma and flair to his playing; and through them, we worked as a band with Max Norman, our producer, [and] even our manager at the time — we really were analytical about trying to take MEGADETH to this place we knew it could go. And we got there — we made it. Problem is, once we were there, it was hard to go back be that band from the first four records. I think what 'Dystopia' is, is finally we landed back in that period of 'Killing Is My Business...' through 'Rust In Peace', of just crushing riffs and complexity. Not just to be busy, but really musical, and complex, and weaving those all together. It's one thing to just shred and be 'that guy', but it's another to bring a group of guys together into a song and have harmony, have melody, sound like a song, and I think that's what we finally nailed on 'Dystopia'."

David: "The '90s were rough for thrash metal. A lot of bands didn't make it, and had to kind of fall apart, regroup and come back in the 2000s, and even in recent years. We're lucky that we just kind of pushed through that. I think the '90s were the scariest time for that, because radio rock came in, MTV went away, all the other big things that helped music be delivered out to the masses went away. The Internet, in a lot of ways, probably saved heavy metal. We're such geeks — wanting to find stuff, shows on YouTube, and we've got our community, through all the social media we get connected all around the world. We're such a tight-knit community. I would say that the Internet is today what tape-trading used to be back in the '80s."

MEGADETH recently completed a North American tour with MESHUGGAH and will play arenas later in the year as the support act for German hard rock veterans SCORPIONS.

MEGADETH is planning on returning to the studio at the end of the year to begin work on the follow-up to "Dystopia".

The band's upcoming effort will mark MEGADETH's first release to feature Verbeuren, who officially joined the group more than a year ago.