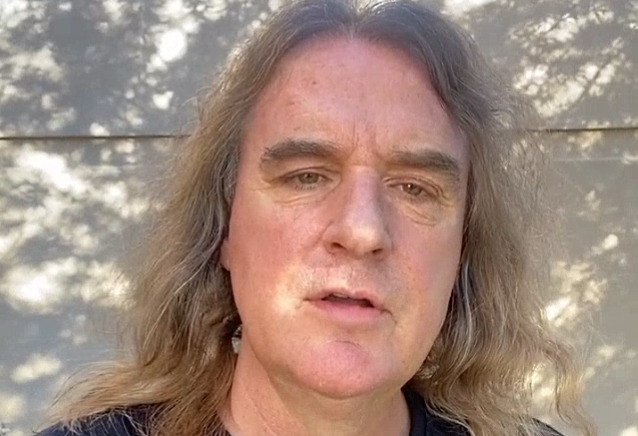 In a new interview with Artists On Record Starring ADIKA Live!, David Ellefson discussed how he moved on from his exit from MEGADETH last year and got involved in a host of new projects, including ELLEFSON-SOTO, Ellefson's collaboration with Jeff Scott Soto, which has just released a full-length album, "Vacation In The Underworld", via Rat Pak Records.

"The funny thing is I'd been working this hard for the last 20 years and even the last 12 years I was in MEGADETH," Ellefson explained (as transcribed by BLABBERMOUTH.NET).

"In 2002, Dave [Mustaine, MEGADETH leader] broke the band up, and I said at that moment, 'I will never put all my eggs back in one basket ever again.' That was at the most expensive point in my life. I had a family. My kids were young. I was the only breadwinner. So I learned my lesson; I said, 'Never again.' So even when I went back to MEGADETH, I continued doing other things and I continued playing with other people and we had METAL ALLEGIANCE; we did all these things. And quite honestly, it's big-boy time. Everybody, get over it. Look what happened a few years back when it all ended and nobody was left with anything. And I was an owner of the group at that time.

"Honestly, by the time we got to where things were last year, I think it showed the character of everybody — quite honestly," David continued. "And honestly, I was kind of, like, 'Hey, man, if you don't have my back, then fuck it — I don't wanna be here anyway.' I'd rather get moving on...

"For me, I always have stuff in the pipeline — I always have other music, other people that I play with," Ellefson added. "And again, it's back to that 'never put all your eggs in one basket ever again.' And I think the other thing, too, is setting my life up in a way that I don't just have to go out and do the music hustle to pay the bills. And that's a very fortunate place to be, and for that I'm always grateful for the work we did in MEGADETH because a lot of that is the royalty money and things like that keep things moving forward. And I'm very blessed with that, because I have other friends in bands bigger than the one I was in who aren't recouped [and] they do have to go do the hustle. 'Cause it's easy to get into those golden handcuffs of you grab the big advances, the managers take their share; meanwhile, the band are basically the ditch diggers out paying back the advances and paying the bills. Touring is expensive. I look at my friends in ANTHRAX who, I guess, decided not to go to Europe because of the expenses. These are real-world realities now. Fuel costs are up — I mean, everything. A gallon of milk — everything has gone up in price. And so I consider myself very fortunate, again, to make music I like with people I like. And quite honestly, if I don't enjoy the music and/or if I don't enjoy the company, I don't wanna be there. Like I said, at my age, however many years I've got left on the planet, man, I wanna enjoy 'em. And if that means one day I just decide to stop playing music so I can just do stuff that I enjoy, I'll do that. I've done my part; I've made my mark. I've left a legacy. I've been happy with the things that I've created. And if that joy ends and if hustling over to Italy gets old and tiresome [laughs], as it can at our age, then I won't do that anymore either. So, to me, I'm kind of just at peace with all of it. It's, like, one day it was this; the next day it was that. And it's, like, 'All right. Life moves on.' I didn't feel like I had to fight my way out the door; I didn't have to hate on everyone. I was, like, 'Hey, you know what, guys? I wish you the best. Have fun. I'm gonna be hanging out over here now.' And that's the reality of it."

Ellefson was fired from MEGADETH in May 2021, just days after sexually tinged messages and explicit video footage involving the bassist were posted on Twitter. At the time, Ellefson released a statement on Instagram denying all social media chatter that he "groomed" an underage fan. He also filed a report with the police department in Scottsdale, Arizona alleging unlawful distribution of sexually explicit images of him by unknown offenders. In the report, Ellefson admitted that he had been exchanging sexual text messages with a Dutch teenager, who captured a video of several of their virtual "masturbating encounters" without his consent and shared them with friends. (According to Ellefson, the woman was 19 at the time of their first virtual sexual encounter.) The now-57-year-old musician, who lives in Scottsdale, first became aware of the video on May 9, 2021, when the claim "David Ellefson of MEGADETH is a pedophile" appeared on Instagram. Ellefson told police he was notified on May 14, 2021 by MEGADETH that the band would be parting ways with him. Three days later, he was fired.