DAVID ELLEFSON Says MEGADETH Is 'The Greatest Thrash Band In The History Of The World', Credits DAVE MUSTAINE With Inventing The Genre

MEGADETH bassist David Ellefson and SONS OF APOLLO vocalist Jeff Scott Soto have been collaborating on some new material recently under the moniker ELLEFSON-SOTO. They are joined in the group by Italian guitarist Andy Martongelli and drummer Paolo Caridi, both of whom previously worked with David on his ELLEFSON solo project.

Asked by Chris Akin of "The Classic Metal Show" what ELLEFSON-SOTO will sound like, David said (as transcribed by BLABBERMOUTH.NET): "I look at it like this. When people come to me, they go, 'Oh, dude. It's thrash,' and, 'It's heavy,' it's, like, I'm already in the greatest thrash band in the history of the world, so I don't need to do thrash anywhere else. I do that in MEGADETH. I play with the guy who invented the genre. So, to me, when I do other things, it's fun to expand. And I'm always writing. I bring certain things into MEGADETH that I know are fitting, I think, of that style. There's a lot of stuff I write that's not, and I don't bring it there.

"This stuff that Jeff and Andy and I are working on, some of it's quite progressive," he continued. "And we're able to go there because of the capabilities that we have. So there's definitely no lack of musicianship. You're gonna go, 'These guys, they're serious. They know what they're doing.' So that's good. And I think, quite honestly, people would expect that. I know for Andy, who's a few years younger than me and Jeff, and being from Europe, is a pretty good barometer; that's a good temperature that we can gauge. He even said, he goes, 'C'mon, Jeff. 'I Am A Viking'. C'mon. All of us in Europe, we just think that's…' Just like people know me from 'Peace Sells... But Who's Buying?' and 'Holy Wars', the die has been cast with Jeff with the early days of Yngwie [Malmsteen], of course, and now what he's been doing recently with SONS OF APOLLO and solo stuff.

"I think the fans, they wanna see us in a certain sphere," David added. "But at the same time, we can take a few chances on a couple of things. In fact, the very first song I had Jeff sing on last year was actually a ballad. Which, I think, for me, was great, because I know Jeff can sing the hard stuff… So, quite honestly, the first thing Jeff and I worked on was not some shred Vivaldi neoclassical metal thing; it was not that at all. And I think that, for me, actually, quite honestly, got me really excited, going, 'Okay, there's a wide berth here of what we can do.' And I think that's when we started throwing some ideas back and forth. It just got us all excited going, 'Wow, this is pretty wide here. We're not limited to just being a one-trick pony."

Jeff also weighed in the ELLEFSON-SOTO, saying: "Yeah, it's gonna be heavy. It's got a lot of classic influence, because we come from that world. We're not trying to reinvent the wheel; we're just trying to do our own version, our own color, our own shape of the wheel. So that's exactly what we're doing with this. It's gonna have some great shred moments, it's gonna have some great vocal-melody-and-hooks moments. And, like I said, it's gonna be heavy, but I think we're also gonna start being able to tap into other things, just to kind of create our own little brand, our own little version of what we think would work best for each other. And that's one of the great things about collaborating with David. He's not saying, 'It's gotta be like this.' And if I send him something, to this day, all the songs that we've done, I haven't gotten a, 'Well, this is all right. I think it could be better with this.' We pretty much hit it on the nail every time. Like with everything, 'I heard this. And I thought maybe if you wanna do a harmony with that or maybe remove this and add…' That goes without saying; that's gonna happen with anybody and everyone you collaborate with. But the overall structure of how we're working together, it works so easy and so well, but yet we're still inventing something that sounds like us."

Earlier this week, ELLEFSON-SOTO released its cover version of the RIOT classic "Swords & Tequila". The song was originally featured on the 1981 RIOT LP "Fire Down Under" (Elektra). The playthrough video can be seen below.

ELLEFSON-SOTO's version of "Swords & Tequila" was produced by Ellefson and Martongelli, mixed by Alessio Garavello in Wembley, England and mastered by Maor Appelbaum in Los Angeles, California. The video is directed by Elia Turra for Fisheye Studio in Verona, Italy.

More new tracks from ELLEFSON-SOTO are in the works with release details to be announced. 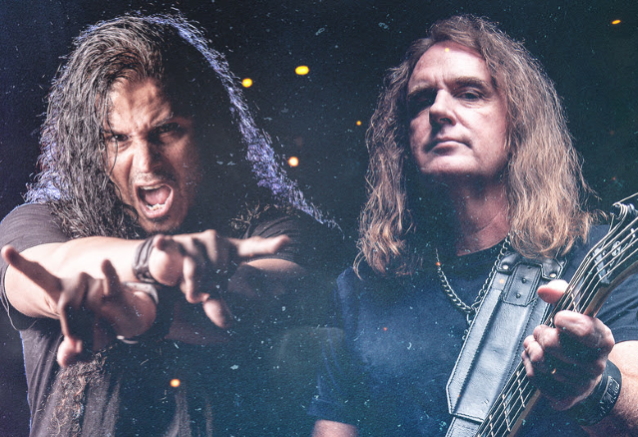