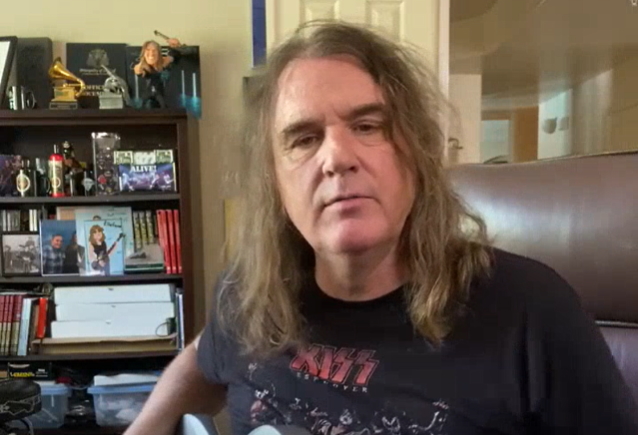 David Ellefson, who was fired from MEGADETH last year following a sex video scandal, has shared a clip in which he teaches you how to play his solo song "Simple Truth".

The bassist, who turned 57 last November, filmed the video as a message on Cameo, which lets users hire celebrities to record brief, personalized video messages about virtually any topic.

Ellefson originally released "Simple Truth" in April 2020 as part of an EP of the same name. At the time, the bassist said that he was donating proceeds from sales of the single to the Italian Red Cross which was on the frontline in the battle against the coronavirus pandemic.

More than two years ago, David told Madness To Creation how "Simple Truth" came about: "We actually wrote it on our first day of rehearsal in Milan, right after we did the show at KK's Steel Mill in the U.K. We got together to rehearse for the tour down there with the all-Italian band. That first day we got together and my singer Thom Hazaert, he says, 'Why don't we write a new song today?' I started chugging out a bass riff, which is the opening line of 'Simple Truth' and I just kind of went from this kind of raw DEAD KENNEDYS kind of punk rock bass line and out came the song.

"So it's kind of ironic, the other day as we were launching our initiatives for the David Ellefson Youth Music Foundation, it hit me," he continued. "I called Thom and said, 'Listen, you know we've been wanting to put this song 'Simple Truth' out? Times like these people aren't focusing so much on new music to buy as much as they are trying to figure out the path forward.' He said, 'Why don't we put the song up and donate all the proceeds from it and we’ll get it to go to the Italian Red Cross as part of the COVID-19 pandemic relief fund?' Since our band is from Italy and since they're all safe and sound, I said, 'This I think would be a perfect time to try to give something back to Italy.' That's exactly what we're doing with that song."