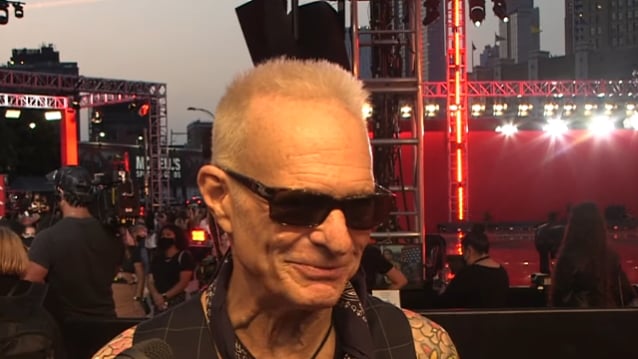 DAVID LEE ROTH: EDDIE VAN HALEN Is 'Either In Heaven Raisin' Hell Or He's In Hell, Consequently In Heaven'

VAN HALEN singer David Lee Roth made an appearance at the MTV Video Music Awards Sunday night (September 12) at Barclays Center in Brooklyn, New York. During a pre-show interview with US Weekly, Roth touched upon last year's death of his VAN HALEN bandmate, legendary guitarist Eddie Van Halen, saying: My guitar player passed away, Eddie Van Halen. He's either in heaven raisin' hell. Or he's in hell, consequently in heaven. Read into that as you wish. And he would have me say it just like that. And I carry on that spirit deliberately."

He later added: "And you know what? I just spoke to Alex Van Halen. We're about to celebrate our 50th year or ragging on each other. [Laughs]"

Eddie passed away last October at the age of 65 after a years-long battle with cancer. His death was announced by his son Wolfgang.

Three months before Eddie's death, David said that he didn't know if Van Halen would ever tour again. He told The New York Times: "I don't even want to say I've waited — I've supported for five years. Because what I do is physical as well as musical and spiritual — you can't take five years off from the ring. But I did. And I do not regret a second of it. He's a bandmate. We had a colleague down. And he's down now for enough time that I don't know that he's going to be coming back out on the road. You want to hear the classics? You're talking to him."

Back in September 2020, Roth said that there were no plans for VAN HALEN to do anything for the foreseeable future. "I think VAN HALEN's finished and this is the next phase," he said, referring to his solo project.

What's the story behind the string around former Van Halen singer David Lee Roth's neck? He says it's not as sentimental as some have guessed. #VMAspic.twitter.com/V0G72jjQka