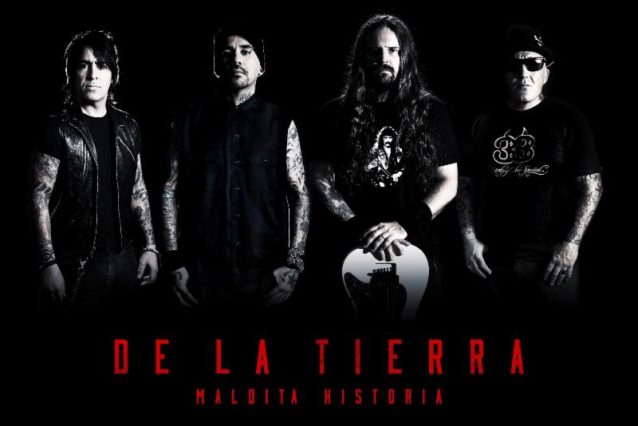 SEPULTURA guitarist Andreas Kisser has joined forces with current and former members of South American bands A.N.I.M.A.L., MANÁ and LOS FABULOSOS CADILLACS in a brand new project called DE LA TIERRA (a.k.a. DLT). The band's 11-song debut album was recorded and mixed by Stanley Soares in Sao Paulo, Guadalajara, Buenos Aires and Los Angeles. It was produced by DLT and mastered by Tom Baker and it will be released in November by Warner Music.

DE LA TIERRA (English-language translation: From The Earth) is:

González, Kisser, Cianciarulo and Giménez got together to give birth to a project that started to be conceived over 8 years ago between Giménez and González. The friendship between these two musicians led to the first meetings, but it wasn't until 2012 in Buenos Aires that the group's makeup would be defined with the arrival of two additional friends they had in common, first Cianciarulo and awhile later, Kisser. This would kick off this new story called DE LA TIERRA. It was actually Kisser who in connecting the origins of one continent proposed DE LA TIERRA as the group's name.

It is Latin America itself that gives them their identity. They are here to stay and to keep making their way based on respect, honesty and the musical brotherhood that embraces them, all of these elements being fundamental parts of the internal structure that is inherent to these four musicians.

Just by the introduction of the four bandmembers, one can imagine the outcome, generating curiosity and lots of anticipation. Audiences will come up with their own definition of what for the time being can be described as powerful Latin metal created by four excellent musicians who feature a long, renowned and impeccable career.

In a recent interview with the official web site of Jason Korolenko (author of the upcoming SEPULTURA biography "Relentless - The Book Of Sepultura"),Kisser stated about DE LA TIERRA: "[This is] the first time I'm playing with another guitarist [in a band situation] after [sharing guitar duties with] Max [Cavalera in SEPULTURA], you know, after so long, and it's not easy to put two guitars together. You really have to know each other and we [Andreas and Andrés] didn't play that much at all together, but we're doing a pretty good job of putting together an arrangement and making it sound like a band. [laughs] We practiced a little and he's a great musician, as well, and everybody's really connected. We are recording in different places, but it's sounding really strong. It's awesome."

Asked if DE LA TIERRA's focus will be primarily on the Latin American market due to the band's Spanish-language lyrics, Kisser said: "Not really, man. We wanna play the whole world, regardless of language. We wanna be the RAMMSTEIN of the Spanish language. [laughs] With German, RAMMSTEIN… they did it without changing their native language. They are a huge success everywhere in the world. I think DE LA TIERRA has the possibility to do that, to play such music that will transcend the language barrier. It's gonna be mainly Spanish, but some Portuguese as well, so you have that possibility of really connecting Brazil to the rest of Latin America. Hopefully it will be a landmark that could help put us more together because Brazil is very separate from the rest, especially because of the language. So… let's see, man."